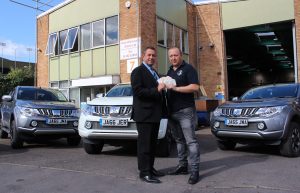 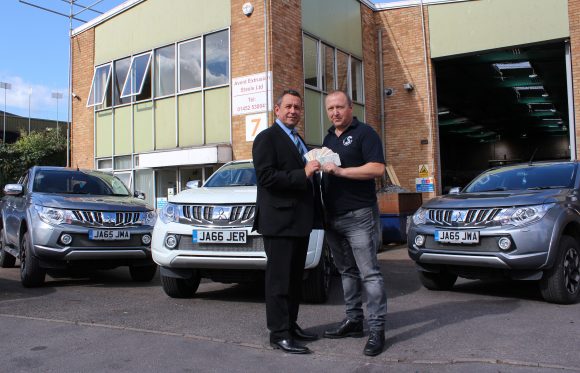 THE owner of a Gloucester engineering company has won £1,066-worth of vouchers in a competition to mark the arrival of the new 66-registration plate at CCR Mitsubishi.

Everyone who took a test drive at one of CCR Mitsubishi’s eight dealerships during the final weekend in August was entered into the prize draw to win the Love2Shop vouchers.

Jeremy Avent, managing director of Avent Extrusion Steels, based in Chancel Close, off Eastern Avenue, was the lucky winner after test-driving a Mitsubishi L200 pick-up with the group’s Cheltenham and Gloucester dealership in Staverton.

Avent’s family firm, which employs his son James, daughter Sophie and son-in-law Quade Douglas, has been using L200s for 10 years and he bought a new one after his recent test drive.

‘I thought they were winding me up when they told me I had won,’ he said. ‘I’ve been driving Mitsubishis since 2006 and the guys at CCR Mitsubishi have always been brilliant. You always get a really good friendly service. It’s great to win these vouchers but they’re not all for me, I’ll be sharing them out amongst the family.’

CCR Mitsubishi held a weekend event across its dealerships to celebrate the arrival of the new 66-registation plate, with special offers and refreshments. The competition draw was made by the company’s managing director, Tim Bagnall.

Dale Bedwell, regional general manager of Cheltenham and Gloucester Mitsubishi, said: ‘I was delighted to be able to ring Jeremy and tell him the good news. He has been a loyal customer of ours so it was great to see him win. I hope Jeremy and the family enjoy spending the vouchers.’