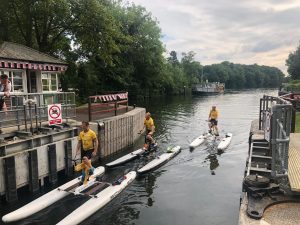 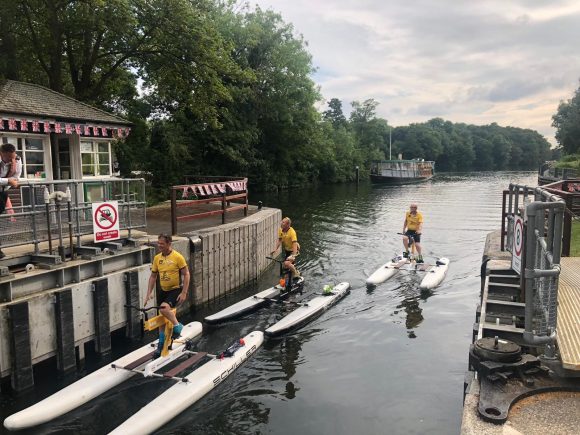 Tim Tozer, chief executive of Allianz Partners UK & Ireland, Jon Wakefield, who was managing director of Volvo Car UK and now heads up the manufacturer’s Swedish national sales company, plus Darren Guiver, managing director of Group 1 Automotive, cycled on the River Thames from its source to London between last Thursday and Sunday.

The Industry Leader Challenge was 171 miles long, with an average of around 12 hours cycled each day. Starting at Thames Head in Gloucestershire, it was a true test of strength, fitness and stamina. The longest day consisted of a gruelling 13.5 hours in the saddle – from Folly Bridge in Oxford to Caversham Lock in Reading.

The trio cycled on water alongside boats and through 45 locks, using self-propelled Schiller waterbikes until they reached the tidal Thames at Teddington, where they continued the last leg of their journey cycling on land until they reached the finish point of the Thames Barrier. A particular highlight was cycling next to the boats at Henley Royal Regatta. 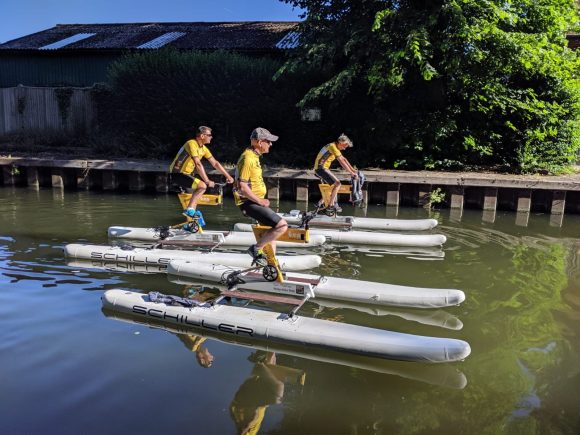 The trio at Caversham

Tozer said: ‘This was such an incredible challenge – I’m so pleased I was part of it. It really was extremely epic and we’re all exhausted now, but it was worth every moment in the saddle. We saw some incredible sights, tested ourselves physically and mentally and, most importantly, raised money for our automotive industry charity. A heartfelt thank you to everyone who has donated – we couldn’t be happier!’

Guiver commented: ‘What a truly amazing event to be part of – it’s definitely something I will remember for the rest of my life! I can’t believe I’m still smiling after 171 miles in the saddle – it was completely exhausting but an unbelievable experience. Thank you so much to all who have donated and helped us along the way – we couldn’t have done this without your support.’

Wakefield added: ‘I can’t even put into words how it felt to be part of the Epic Thames Waterbike Ride. It really was the experience of a lifetime but also the toughest thing I’ve ever done. We pushed ourselves harder than ever before to complete this and raise as much money as possible for Ben. Huge thanks to everyone who donated – your support means the world to us, to Ben and to everyone that Ben supports.’

Matt Wigginton, business development director at Ben, said: ‘We are in complete awe of Tim, Jon and Darren for taking on such an epic challenge to raise money for Ben. Cycling on water for over 10 hours a day on one of the busiest rivers in England is extremely tough!

‘We really appreciate the support from all at Volvo Car UK, Allianz Partners UK & Ireland and Group 1 Automotive. I would like to say a heartfelt thank you from everyone at Ben – you guys are all amazing!’

A target of £300,000 has been set. To donate, go to justgiving.com/fundraising/benilc2019. All money raised by the challenge will help Ben to support automotive industry people.

A video of the intrepid trio’s first training day on the Thames is available to watch via YouTube:

MORE: Get yourself on board the Bangers4Ben 2019 cheese and wine tour!