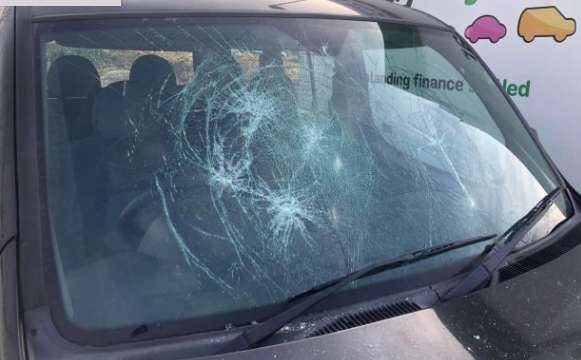 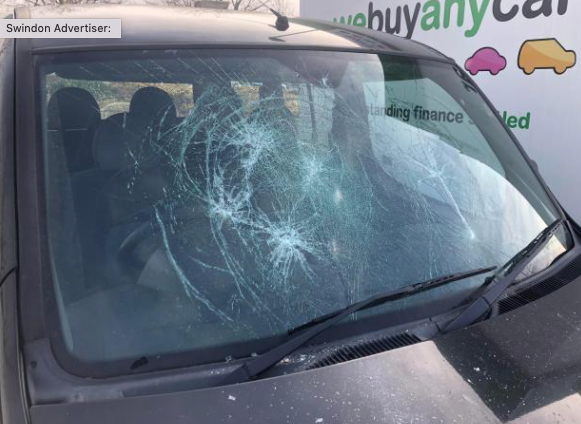 Every used car on a We Buy Any Car storage facility was smashed up in a late night attack causing thousands of pounds worth of damage.

The branch manager arrived at work on Monday morning to discover the attack which had targeted six vehicles.

Ian Quinton, who runs the site at the Orbital Shopping Centre told the Swindon Advertiser that cars had their windows smashed and shopping trolleys rammed into them.

Quinton told the paper: ‘It was just mindless damage, there was nothing in the cars to steal, and you can see the person wasn’t interested in what was in the cars, they just wanted to break them.

‘I’ve never seen anything like it and I certainly didn’t expect to come in and see something like this.’ 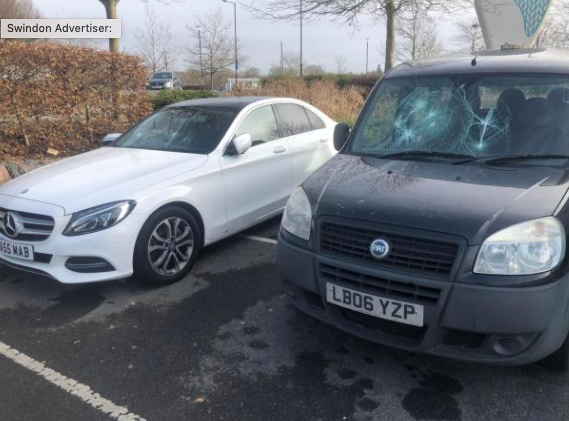 Damage to the We Buy Any Car stock in Swindon. Picture: Swindon Advertiser

Models from Mercedes, Fiat, Mitsubishi and Vauxhall were among those that were damaged.

Heavy bricks had been thrown at the vehicles and the wing mirrors had been smashed off that cars.

Quinton said he was glad the firm had business insurance and that no public cars were attacked in the vandalism spree.

He estimated the damage will cost around £10,000 to repair.

Quinton reported the damage to police who informed him a 14-year-old boy had been arrested.

He told the paper: ‘I couldn’t believe someone would do something like that, especially in a place riddled with CCTV.

‘I immediately rang the police and they told me that they already knew about it and had arrested someone already.

‘Apparently a member of the public spotted them doing it at about 2 or 3 in the morning and had rang the police.’

A spokesman for Wiltshire Police added:’A 14-year-old local boy was arrested on suspicion of criminal damage and has since been released under investigation while our enquiries continue.’

We Buy Any Car is owned by Constellation Automotive Group.

The group recently agreed to buy franchised dealer group Marshall and has taken a 20 per cent stake in fellow listed group Lookers.

Pics: Courtesy of the Swindon Advertiser