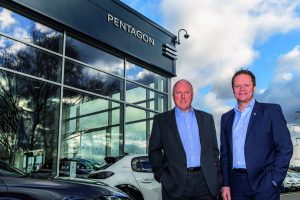 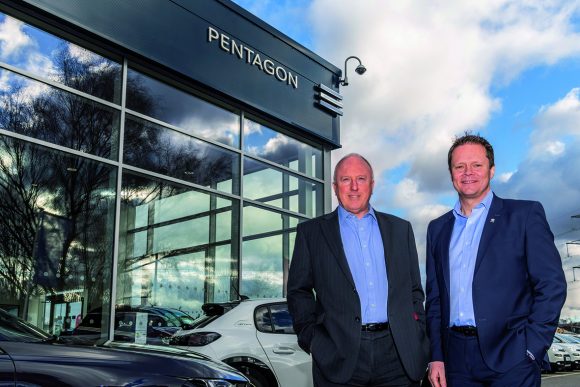 Current MD David Lewis (pictured left above) will be retiring in July, and the group has now confirmed that the ex-Peugeot UK boss will take up the reigns.

Pentagon first formed in 1991, when it had just one Vauxhall dealership in Derby.

It has grown considerably over the last 30 years with 46 franchises across 26 sites in the East Midlands, and in 2017 it became part of Motus Group.

Lewis said: ‘This is a planned development that I had been considering for some time.

‘It has been a pleasure and a privilege to work with the Pentagon and Motus Group teams to develop our strategy of concentrating on fewer brands, but with a greater scale of operation for each.

‘I have known David Peel for many years – we were actually trainees at the same Ford dealership in South Wales at the start of our careers – so it’s very pleasing to find those two careers meeting up again in such a positive way at this stage.’

Peel explained that following almost 20 years with Groupe PSA he was ‘ready to consider a change’.

He previously ran Peugeot UK for five years, and before that worked as its regional and fleet director.

Earlier in his career he was also chief executive of PSA Groupe-owned dealer group Robins & Day.

He said: ‘As one of the more progressive dealer groups, with growing Groupe PSA interests, I was very aware of the progress being made by Pentagon Motor Group, and the happy coincidence of David’s retirement plans made the final decision to join very easy for me.

‘Having met many of the Pentagon Motor Group people during my time at Peugeot UK, I know David has developed a very solid team and I now look forward now to driving the business on even further with them.

‘There’s still plenty to be done, but the business is very healthy despite the challenges of the pandemic, and, as part of Motus Group (UK), we can be really confident in the future. And for me personally, the chance to work across a number of the most important brands in the UK market will be a refreshing challenge.’

‘He has been a valued and trusted colleague, working tirelessly to help us shape and integrate the Pentagon Motor Group.

‘His reputation in the industry and within our own group as an experienced leader is well-founded; he will be sorely missed after his 30 years’ service to our UK business.

‘He and I are both delighted however, that we have secured David Peel as his successor.

‘It augurs well for both planning a hand-over both in the coming months and the longer term future.’