Fiat boss: Too many cars are being bought by too few people 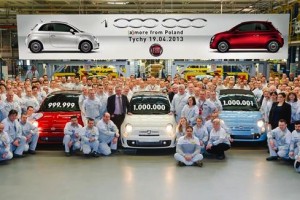 TOP industry bosses are agreed that the European car market is still some way off where they would like it to be.

In fact Fiat Chrysler boss Sergio Marchionne says the market is down by some three million vehicles, the equivalent of 10 or 12 car factories and thereby lies the problem – too many cars are being bought by too few people.

Politically, closing factories in Europe, and particularly in Italy, is not good from Marchionne’s point of view. He would much rather see a more unified Europe with less emphasis on national interests. He would also like to see the EU be more protective of its member’s markets.

‘We are already over supplied with cars locally and we don’t have enough buyers yet the EU seems happy to sign Free Trade Agreements with South Korea and Japan. Yet every time I bring this subject up in Brussels I am rebuffed and ignored.’

For Ford, with headquarters in Detroit, making tough decisions in Europe is not quite so painful. It has shut plants in the UK and the Mondeo factory in Ghenk, Belgium will close at the end of the year. Mondeo production will shift to the company’s plant in Valencia, Spain to eat up spare capacity there.

Chief operating officer Mark Fields told Headlineauto: ‘We have taken some tough decisions and we have a transformation plan aimed at returning Ford to profitability in Europe by next year. At the moment we are on track.

‘The plan is based around three strands, product, brand and cost. We are introducing 25 new models in Europe between 2012 and 2017, and we improving the customer experience to improve the brand image. In terms of cost we have already taken the decisions on reducing production capacity.’

While Fields is confident about hitting profits by the mid-decade target, Marchionne is not sure. ‘Fiat, Ford, General Motors and PSA Peugeot Citroen are all continuing to make a loss and that is not sustainable.’

Will Fiat hit its 2015 target to return to profit? Marchionne was non-committal. ‘We said mid-decade and that is as vague as hell – as long as it happens before 2020.’

The next issue of Car Dealer is a Geneva Motor Show special – make sure you download our FREE iPad app so you don’t miss out. Click here to download it