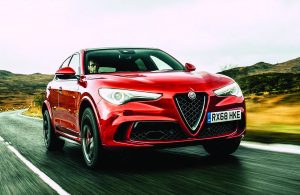 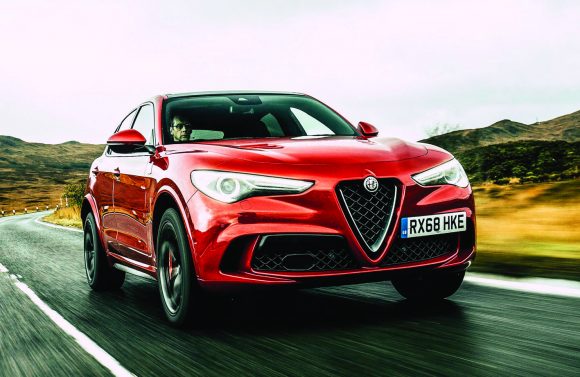 This range-topping SUV from Alfa Romeo is designed to take on rivals such as Porsche and Mercedes at the performance four-wheel-drive game.

Alfa has fitted the Quadrifoglio (or QV, for short) with its Q4 all-wheel-drive system, which transfers 100 per cent of torque to the rear wheels during regular conditions.

If it senses the car’s limitations are being approached, it can transfer 50 per cent of that power to the front axle to aid with traction.

This is helped further by the inclusion of Alfa’s chassis domain control and active torque vectoring, both of which give the car as much grip as possible through corners.

The Stelvio QV makes use of a 2.9-litre bi-turbo V6 engine producing 503bhp and 600Nm of torque. It’s the same unit as the one you’ll find in the Giulia QV saloon. Power is sent to all four wheels via an eight-speed automatic transmission, and you get adjustable dampers, too.

Start off slowly in the Stelvio QV and there’s little to tell you that this is a performance SUV. It’s relatively quiet, and the V6 under the bonnet makes little of its presence felt. Press on, however, and it soon becomes clear that this is no ‘ordinary’ four-wheel drive. That engine is impressively flexible.
Gearshifts are fast and immediate, and the whip-crack action of the beautifully engineered one-piece aluminium paddle shifters is a delight each and every time.

It’s only let down a little by the ride. In regular modes there’s a decent amount of pliancy but this is counteracted by a little too much roll. The steering is the stand-out star of the show, though – direct, quick and full of life.

We’d argue that the Stelvio is one of the best-looking ‘regular’ SUVs on sale today – and the added QV treatment only works to enhance these excellent visuals. Flared wheel arches, huge 20-inch alloy wheels and a variety of air inlets give the car a lot of presence.

The rear is nearly as strong as the in-your-face front end in terms of design, with four aggressive exhaust pipes poking out from either side of a diffuser section.

The carbon-shell sports seats fitted to our test car looked beautiful and were immensely supportive – but then you’d want them to be, considering they’re £3,250 extra. The leather steering wheel feels good in the hands and the stitching on the dashboard is impeccably neat.

It’s just a shame that this is contrasted by hard plastics surrounding the switchgear, while the gearstick itself feels flimsy and has sharp edges along the back of it.

Standard equipment levels on the Stelvio are, as you’d expect for a range-topping car, good. Features such as dual-zone climate control and bi-xenon headlights come as part of the overall price, along with a full sports exhaust system and a complete sports bodykit.

There’s also Alfa’s standard-fit 8.8-inch infotainment system, but although it’s relatively clear, it’s lagging some way behind rival offerings in terms of usability. Even zooming in and out of the satellite navigation is a hassle.

Autocar said: ‘This is comfortably the most engaging performance SUV money can buy.’ Top Gear said: ‘You drive the Quadrifoglio and it wins you over with sheer charisma. Daft, lovable, roguish thing.’

This is easily one of the most dynamic performance SUVs on sale. Sharp handling, a wonderfully responsive engine and a razor-sharp gearbox combine with excellent balance to help make it an exciting drive, with only a rather harsh ride in firmer settings spoiling the overall effect. The cabin quality lets it down somewhat, but if you’re after a performance SUV, we’d recommend looking in this direction.