Home > Road Tests > First Drive: Audi A1 – Everything you want a small Audi to be 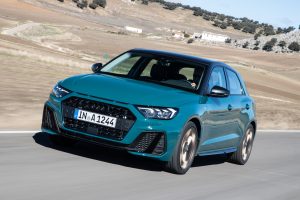 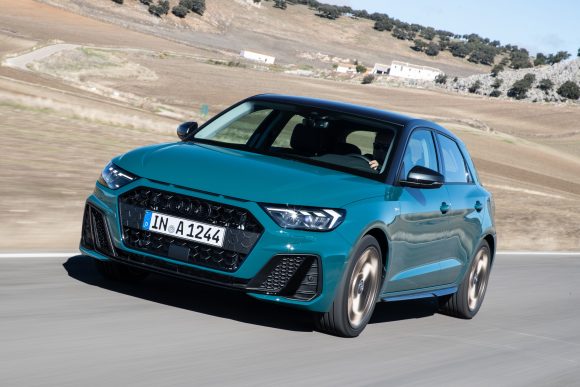 First Drive: Audi A1 – Everything you want a small Audi to be

The Volkswagen Group is brilliant at making the most of what it has – and the A1 is a chief example. Using the same MQB chassis and engine architecture enjoyed by the latest VW Polo and Seat Ibiza, it’s a really premium product that bears only a passing resemblance to its siblings – and every resemblance to its bigger brothers within the Audi range.

The previous A1 was a roaring success, thanks to its fashion-led design and trademark solidity, trading blows with the likes of the Mini Cooper. The new car swaps cuteness for sharp angles and motorsport-inspired styling, while hopefully retaining everything that made its predecessor so popular.

As mentioned, the A1 now rides on the MQB A0 platform – a selection of chassis components that underpin most of the Volkswagen Group’s small car range. That endows the A1 with a choice of engines, from which Audi has chosen just three – all petrol.

The interior’s also been given a makeover, with a newly spacious feel courtesy of the MQB platform and its long wheelbase – plus bags of technology, befitting Audi’s high-tech positioning.

Best of all is the personalisation on offer. The new A1 can be had with a wide choice of exterior colours, contrasting colour packs, alloy wheels and interior ambiences – which can be mixed up any way the buyer pleases.

There are three petrol engines on offer for the A1. The entry-level is a 1.0-litre, three-cylinder unit with 115bhp – expected to be a big seller in the UK.

Next up there’s a 1.5-litre four-cylinder with 148bhp or a top-spec 2.0-litre with 197bhp – lifted from the VW Polo GTI, but not badged as one of Audi’s hot ‘S’ models. The lowlier pair of engines can be had with six-speed manual gearboxes or optional seven-speed dual-clutch autos, while the 2.0-litre is automatic-only.

The 1.0-litre is a really sweet engine, with a welcome slug of torque between 2,000 and 3,000rpm making relaxed progress very easy. It’s very refined at a cruise, with just a hint of three-cylinder thrum at low revs. It pairs well with the six-speed manual, too, which has a reassuring solidity to its action.

The 1.0-litre isn’t especially fast, but then nor is the 1.5-litre – and that’s noisier, thirstier and less pleasant to use. Topping the range is the 2.0-litre, which is powerful and turns the A1 into something of a hot hatchback – but it’s likely to be very pricey to buy.

The A1 handles much like its siblings from within the VW Group – the VW Polo and Seat Ibiza. That’s definitely not a bad thing – there’s an expensive feel to the way this car rides and handles, with sharp edges taken off all the bumps and a pleasing weight to the steering.

There’s not a lot of excitement to be had, though. The A1 doesn’t handle anywhere near as sweetly as a Mini or a Ford Fiesta, as it doesn’t feel as light on its feet. That’s not really backed up with a cushioned ride, either – all A1s get a sporty suspension setup, which despite taking the edge off poor surfaces does jolt occupants over larger imperfections in the road.

Many will like the neutral way the A1 handles, but keen drivers will be left wanting more. Maybe a potential forthcoming ‘S’ model could remedy that…

The new A1 is a really smart-looking little thing, and it’s blessed with the ability to wear lower-spec trims without looking like a poor relation. Our ‘Sport’ model had 17-inch alloy wheels as well as a flat paint colour and didn’t suffer for it – mainly thanks to sharp LED running lights front and rear that lend a high-tech look to the car.

There are divisive elements – there’s a rather wide C-pillar, inspired by the Q2, and the triple slots between the bonnet and the grille lend an aggressive edge to the car. But it’s possible to customise the A1 to within an inch of its life, so you need never see two the same – available for testing were some really eye-catching combinations. Sea-green bodywork with bronze wheels, anybody?

Of all the cars we expect to disappoint with their interiors, the A1 wasn’t high up the list. We’ll start with the good. There’s far greater room in here for passengers and luggage – thank the MQB platform for that – and the A1’s 335-litre boot is on a par with anything else in this segment. The seats are also very comfortable and well adjustable even on more basic models.

There’s great technology on offer, too. The driver has digital dials as standard, upgradeable to a full 12-inch Virtual Cockpit as an option, while the top-spec touchscreen infotainment system is superb. Controls are also simply laid out and easy to follow.

The big disappointment is with the quality of the materials. Sure, areas such as the top of the dashboard are crafted from squidgy soft-touch plastic – but the centre console and especially the doors feel downright cheap. Given that you spend a lot of time with your elbows resting on the door cards, the hollow feel is less than pleasant – and not something we’d expect even from the smallest Audi in the range.

Our mid-range ‘Sport’ model (named ‘Advanced’ in the German range) came with all the essentials. The LED head- and tail lights really enhance the exterior look of the car, as did smart 17-inch alloy wheels – sadly, the latter are optional. What you do get as standard are 16-inch alloys, sports seats, rear parking sensors and cruise control, as well as Audi’s MMI plus infotainment system.

Step up to S line and you’ll gain 17-inch wheels as standard, LED interior lighting, even firmer sports suspension and leather-trimmed upholstery. The options list holds goodies such as heated seats, a connected upgrade for the infotainment system, the aforementioned Virtual Cockpit and a top-end Bang and Olufsen 3D sound system.

What Car? called the A1 ‘a darned fine car’, while Evo said: ‘It exhibits all the usual Audi traits, but lacks any real fun factor.’

Audi gave us almost everything we expected with the A1 – impeccable driving manners, sharp styling and a range of high-end equipment, plus the personalisation touches that will make it so popular with the crowds of buyers who might otherwise choose a Mini. Some of the interior quality is disappointing, but otherwise this is an excellent supermini – albeit, for a high price.