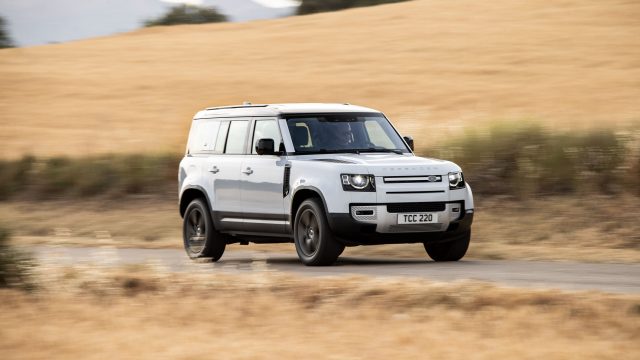 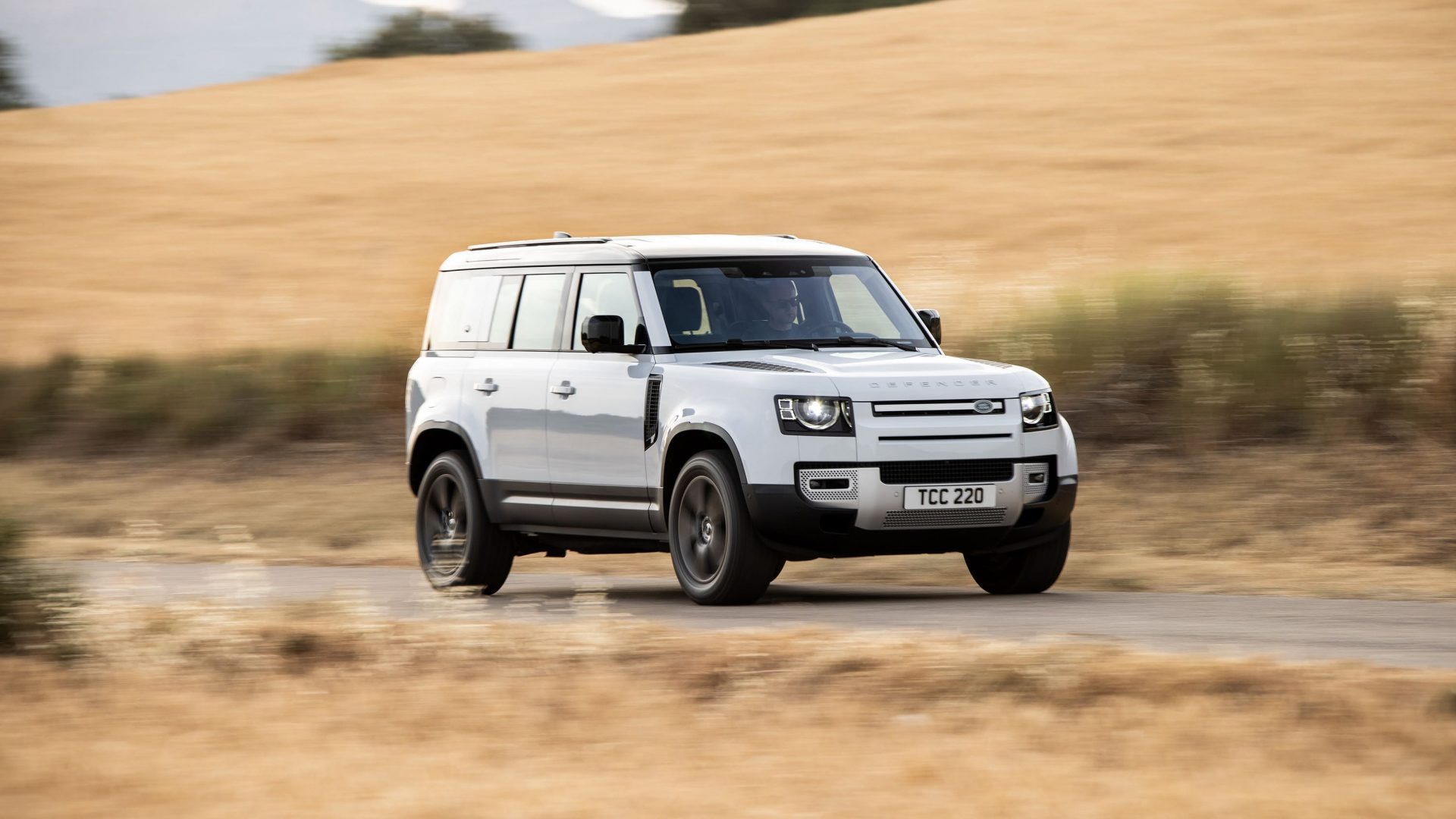 First Drive: Could the P400e plug-in hybrid be the perfect Land Rover Defender?

Land Rover has widened the Defender range with this new plug-in hybrid version, promising a more efficient ownership experience but not at the cost of off-road prowess. Has Land Rover pulled it off? Jack Evans finds out

When Land Rover finally launched the Defender last year, the British brand promised there would be a whole family of models, including a short-wheelbase ’90’ and even a V8 version. Stopping short of creating a full-electric Defender, Land Rover has added a plug-in hybrid model that could be ideal for company car drivers, and off-road fans who want something a little different from Defenders of yore.

You’d be hard-pressed to notice any differences – an extra filler cap being the only real giveaway on the outside. The PHEV, called P400e, only comes in five-door ‘110’ guise – the batteries would’ve proved too much to pack into the smaller 90 – and space on the inside has taken a slight nosedive.

The boot is down to 853 litres with the second row of seats in place and 2,127 with second row put flat from 1,057 and 2,300 litres respectively. That said, that’s still more than enough room.

Of course, the PHEV benefits from additional readouts detailing the remaining charge left in the batteries as well as how that electricity is being deployed in combination with the electric motor. 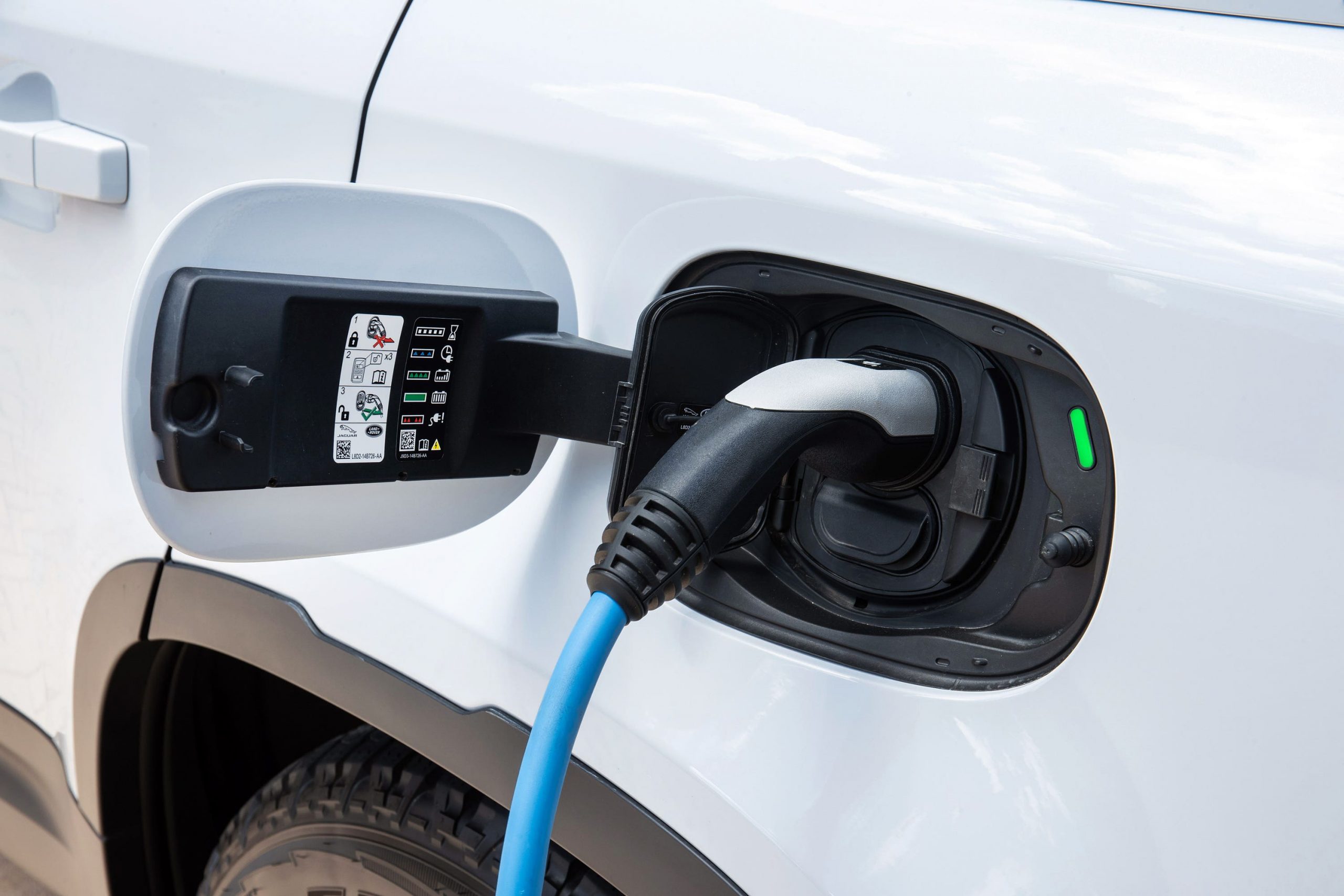 The Defender P400e – named in reference to the car’s power output measured in PS – hits the road as the most efficient version of the off-roader to date. Underneath the bonnet sits a 2.0-litre four-cylinder petrol engine, which combines with an electric motor and 19.2kWh battery. Together, you get a sizeable 398bhp and 460Nm of torque, equating to a 0-60mph time of 5.4 seconds and a top speed of 119mph.

In efficiency terms, the P400e should return a claimed 85.3mpg – providing the batteries are topped up, of course – while CO2 emissions stand at 74g/km. Capable of travelling up to 27 miles on electric power alone, the P400e’s batteries can be topped up from zero to 80 per cent via a home wallbox in two hours, or seven hours with a three-pin plug. The Defender is also one of the only hybrids that can charge at speeds of up to 50kW, which would return an 80 per cent charge in just 30 minutes.

The added quiet and refinement that the hybrid powertrain really plays to the Defender’s strengths. It’s a comfortable car regardless, but the way the P400e quietly wafts along on its standard-fit air suspension means that it’s a genuinely relaxing car to potter around in.

The switch between electric and petrol power is hard to notice, too, while thanks to its ability to travel at speeds of up to 81mph on electric power alone means that you can also use that zero-emissions capability on the motorway. That said, if the majority of your miles are conducted on the highway and at greater speeds, you may still want to consider the diesel – once the battery power has been depleted, the P400e will struggle to match the oil burner for efficiency. However, if you’re travelling shorter journeys with longer ones peppered in between, you’ll really notice the added efficiency that this setup brings. 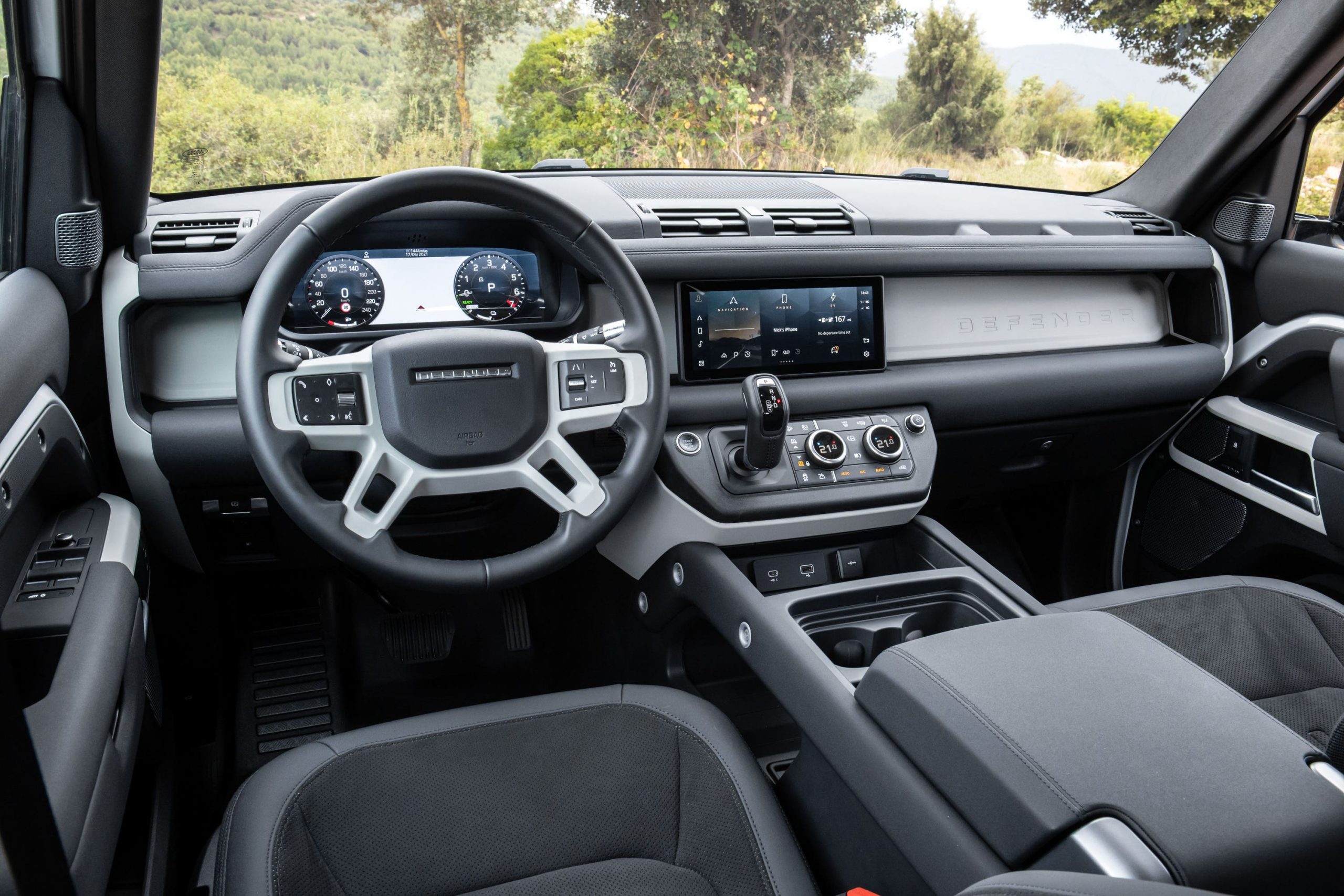 The P400e looks – as you’d probably expect – just like a regular Defender. Land Rover has resisted the urge to add loads of hybrid-only design touches, with just the rear badging and charging port showcasing this as anything but a ‘regular’ Defender. In 110 layout it has a real presence, while our solid white test car had a particularly utilitarian feel to it.

The Defender’s styling has, in our eyes at least, been a success. It brings enough of the original’s styling touches so as to not dismiss the past, but is up to date enough to be aware of the future. This PHEV version feels particularly appropriate.

The Defender’s cabin feels robust and well made. There are loads of big, chunky switches and dials which not only look good, but will no doubt prove easy to use when wearing gloves during colder months. There’s plenty of space, too, with all manner of cubbies and storage areas ensuring that there’s a place for everything.

There’s the option of either five- or six-seater layouts, too, giving families a more flexible seating option should they need it. You’ve also got loads of charging ports dotted throughout the cabin, ensuring that everyone can charge their devices as and when they need to. 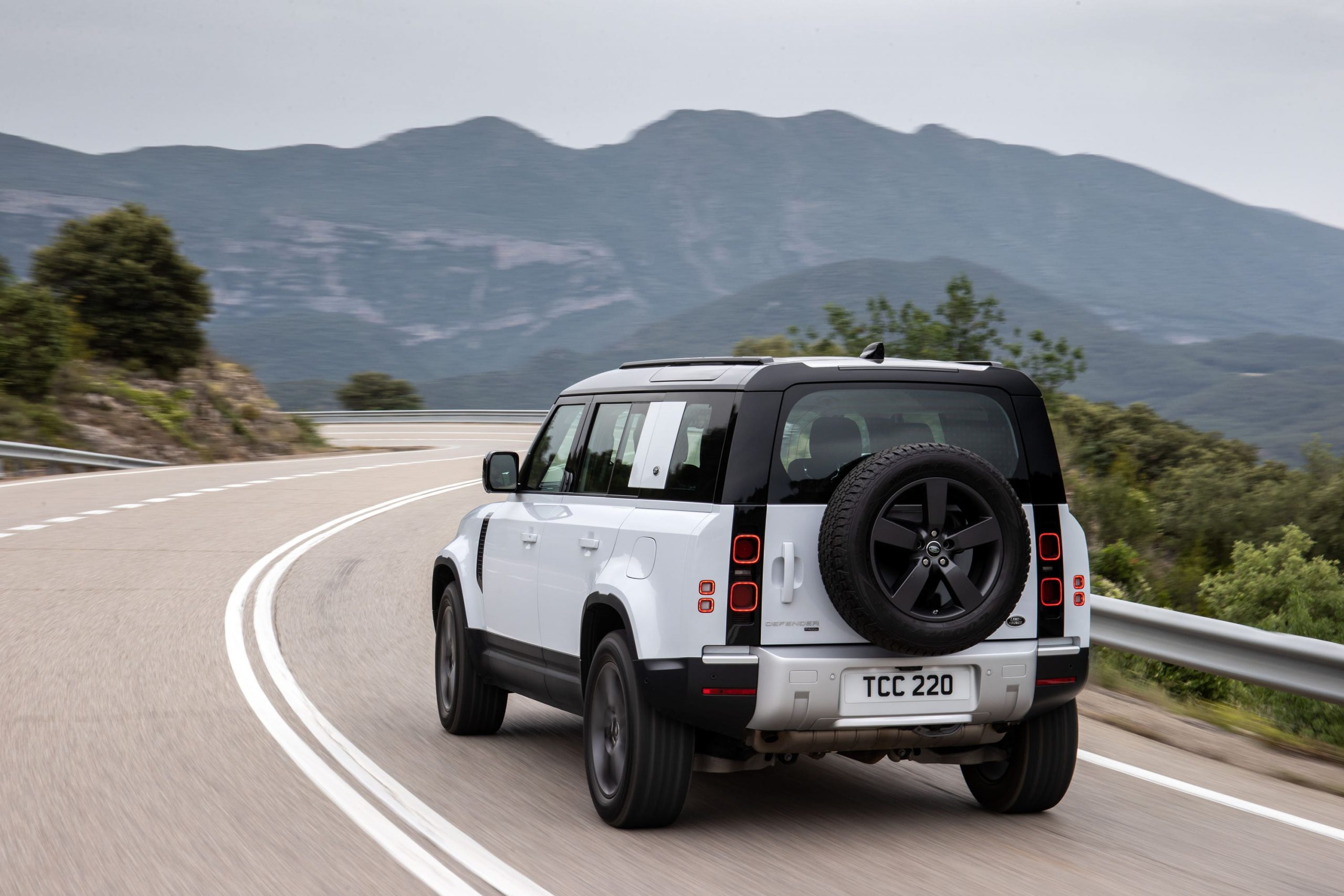 Defender P400e models come with a comprehensive list of standard equipment, which, considering prices start from just over £65,000, is no bad thing. All models boast 20-inch alloy wheels, air suspension and three-zone climate control. Land Rover’s excellent Pro Pilot infotainment system is included too, transforming the way you interact with all of the car’s major functions. It’s clear, simple and easy to use while the integration of Apple CarPlay is one of the most successful we’ve seen – it fills the screen, rather than settling for a small portion of it as we’ve seen on other models.

There’s more than enough equipment on board to keep most drivers happy, that’s for sure.

Given the performance it brings as well as the added efficiency brought on through its hybrid setup, the P400e could be the most compelling version of the Defender on sale. Though high-mileage drivers – as well as those who more frequently find themselves towing – will no doubt lean towards the diesel versions, for everyone else this plug-in hybrid version could be a very good fit indeed.

It’s not often that a car allows you to have your cake and eat it, but the Defender P400e appears to be a rare example of this in action.