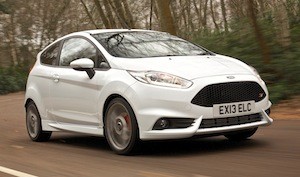 FORD’s Fiesta has extended its lead yet again in the new car market, after topping the charts in October’s best-seller list.

According to SMMT, the top 10 best-seller list for October was once again dominated by Ford, Vauxhall and Volkswagen – all of which recorded very similar figures year-to-date.

As usual, the Ford Focus followed close behind in third place, selling 5,069 units in October and the Volkswagen Golf came in fourth with 4,562 sales.

Vauxhall’s Insignia popped into eighth position selling 2,710 units and rounding up the top 10 was Fiat’s 500 in ninth with 2,672 units and the BMW 3 Series holding onto the final spot with 2,582.

However, when looking at the year-to-date figures, the top-seller list is quite different.

The Fiesta continues to top the chart with 104,621 units, followed by its larger sibling – the Focus – in the number two spot with 76,493 units. Ford sits comfortably ahead of the Vauxhall Corsa in third at 72,493 units.

The Astra follows in fourth with 57,758 units, while Volkswagen’s Golf remains in fifth position with 56,357.