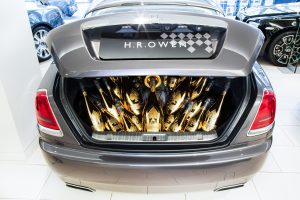 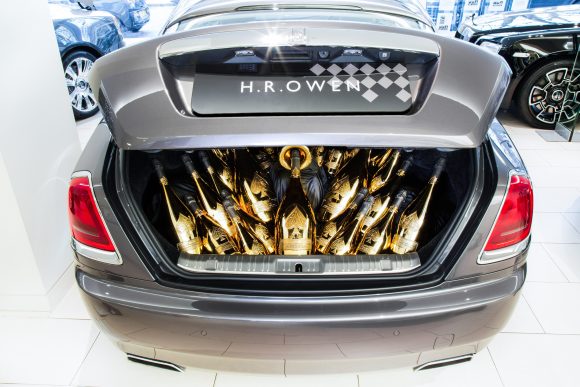 More than 40 VIP guests were among the first consumers in the world to preview the rare and newly released Champagne Armand de Brignac Blanc de Noirs Assemblage Two (A2). Only 2,333 bottles of the ultra-prestige and highly collectable cuvée have been created.

During the evening, Champagne Armand de Brignac chief executive Sebastien Besson, who was a special guest at the Berkeley Square event, said he would fill the boots of both Rolls-Royces bought at the tasting with the iconic champagne, and more than £30,000-worth of fizz ended up being stacked in the Ghost Black Badge and Wraith, which have respective boot capacities of 490 and 470 litres.

Besson said: ‘We were delighted to host an exclusive prestige champagne tasting event with Rolls-Royce, previewing the first bottles of our rarest cuvée, the Blanc de Noirs A2. To our surprise, guests confirmed the purchases of a Wraith and a Ghost Black Badge that very evening, so in celebration we decided to fill the boots with bottles of Armand de Brignac.’

Claus Andersen, brand director of Rolls-Royce Motor Cars London, said: ‘We thoroughly enjoyed teaming up with Armand de Brignac for its champagne tasting exhibition, and it proved to be a hugely successful event. Our clients had a fantastic time, and we’re very thankful for Sebastien Besson’s generosity filling the car boots with champagne. It’s only fitting that the Rolls-Royce of champagne came together with Rolls-Royce itself.’

On SuperUnleaded.com: 6 Racing Games Every Petrolhead Needs This Christmas