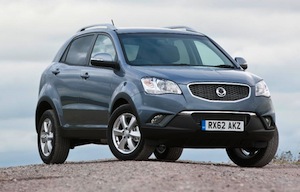 Korean firm SsangYong has returned to the UK – and arguably headlining its range is its Giugiaro-designed SUV called the Korando. James Batchelor has driven it.

This is the first new SsangYong for about five years and is spearheading the Korean firm’s return to the UK market. It’s the car that SsangYong is tempting dealers to take the franchise with, and is a rival for Hyundai’s ix35 and the Kia Sportage.

Just one engine. It’s a 2.0-litre diesel engine made by SsangYong that develops either 147 or 173bhp and 360Nm of torque. 60mph comes up in 9.7 seconds, top speed ranges from 112 to 116mph while the Korando’s fuel economy is between 37.7 and 47.1mpg depending on spec and whether the car is two-wheel-drive or four-wheel-drive. Emissions range from 157-199g/km and the engine is punchy, but harsh under acceleration.

There are five to choose from – and this is SsangYong’s party piece. The base S model comes in at £16,995 and features a leather steering wheel and gearknob, cruise control, 16-inch alloys, roof rails, puddle lamps, air con, and Bluetooth connectivity. The range topper, the EX Auto at £22,995 adds leather, heated seats front and rear, sunroof, privacy glass, 17-inch alloys and a rear spoiler.

Our opinions are mixed here. To its target market, the Korando is more than satisfactory – it has a two-tonne towing capability, after all – but to the driver used to other more recent Korean products, the Korando will be a bit of a disappointment. Ride comfort reigns supreme here at the cost of body control, and vague steering doesn’t make for a very involving driving experience.

Auto Express acknowledged its low price, but added ‘unfortunately, value is the only thing the Korando has in its favour’, while Parkers said: ‘If you’re not too fussed about refinement, dynamics or finish, then it’s worth considering’.

The Giugiaro-designed body is probably the most pleasing aspect of the Korando; we think it looks rather smart. The interior, however, feels about six years out of date, and a poor driving experience are unfortunate minus-points. But it must be remembered the Korando is priced cheaper than most of its competition and for the buyers SsangYong is targeting – around 1,500 in a full year – the car will be more than adequate.