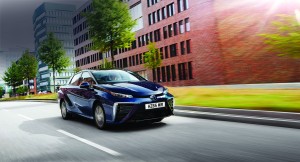 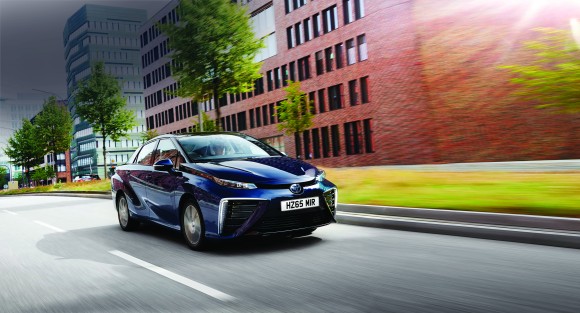 Toyota’s first hydrogen fuel cell-powered car. Similar to an EV, it produces no harmful emissions, emitting only water – water clean enough to drink, Toyota is keen to add. Over 20 years of R&D has gone into the futuristic E-segment saloon which Toyota will release next year.

Technically speaking, the magic of the Mirai is not under the bonnet as the compact fuel cell stack is located under the front seats. Oxygen comes through a small pipe under the bonnet and the hydrogen from two separate tanks. Within the 370-cell stack, the hydrogen molecules hit a catalyst and split into hydrogen ions and electrons. The ions are pulled towards the negatively-charged oxygen ions and bond to them, while the electrons create a moving current in the cell. This pairing produces electricity – to power the vehicle – and water which is ejected from the tailpipe. The Mirai also features a 244-volt battery, which is automatically selected to drive the motor in order to optimise environmentally-efficient and powerful running.

The infotainment system in the Mirai is similar to that in the Prius, Toyota’s popular hybrid. Only one trim level is available in the Mirai, but with limited production figures forecast for the next few years and with buyers investing in the technology rather than the looks, this is unlikely to become a problem.

Immediate power delivery to the front wheels makes for a brisk 9.6-second acceleration up to 60mph and with a top speed of 111mph, the Mirai sits comfortably within the expected performance of an E-segment vehicle. A direct-drive single-speed gearbox provides a smooth and quiet drive. Eco mode reduces throttle response by an average of 25 per cent, while power mode increases performance and decreases range – expected to be in the region of 300 miles – ‘comparable to petrol engines,’ claims Toyota.

Telegraph Cars says: ‘The Mirai looks like the future, with angles and huge vents to bring in lots of oxygen to cool the fuel cell stack and make sure the water doesn’t boil, and weird bits of bodywork sticking out.’

The Mirai’s styling takes a lot of getting used to, but given the futuristic technology inside, the finish is forgiveable. However, despite how clever the fuel cell stack is, problems arise when it comes to refuelling the car. With only three filling points in the UK at present – all located within London – the Mirai would not currently prove a sensible option for drivers anywhere else.