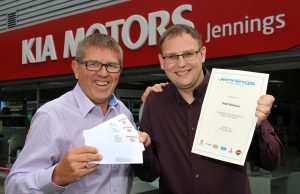 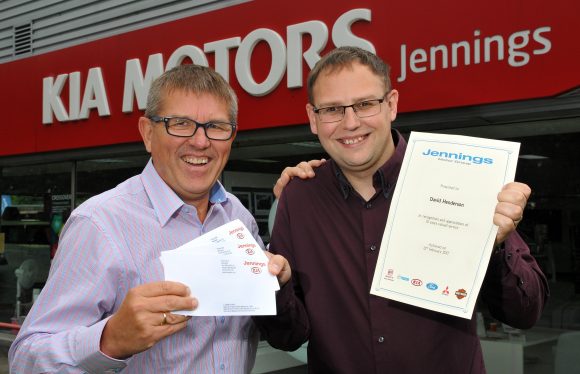 A MEMBER of staff at Jennings Motor Group has been rewarded for 15 years of continuous loyalty to the company.

Hepple said: ‘Not only is David a loyal member of staff, but he is also a dedicated and committed member of the accounts team who will continue to succeed in future years.’

As dealer accountant, Henderson is responsible for preparing month-end management accounts for the group’s Kia dealerships in Washington and Stockton.

His career in the motor industry began at the age of 17, when he was appointed as a cost clerk at the former Arriva Ford dealership in Sunderland, which was subsequently taken over by Jennings Motor Group.

A change of career path was on the cards when he transferred from accounts to work as an advisor within the service department at the group’s former Ford and Mazda dealership in Sunderland.

But he said that although he enjoyed his time gaining experience working in a customer-facing role within the busy service department, he soon realised that his passion was for numbers.

After attending night classes for three years at Sunderland College, he achieved an Association of Accounting Technicians qualification, which resulted in transferring back to the accounts department and working as a credit controller.

Henderson said: ‘I was always interested in accounts, I just knew it was where I wanted to be, and I was delighted when I was given the opportunity to progress in this field after achieving my AAT qualification.’

In 2011, when Jennings Motor Group opened its Kia operation in Washington, he was promoted to dealer accountant, and in 2013 when the company further expanded with the opening of another Kia dealership in Stockton, he became responsible for both dealerships.

Jennings Motor Group rewards members of its 524-strong workforce after 15 years of continuous service, then after every five years. Henderson is one of 28 employees across the group who will receive rewards throughout 2017 for a combined 690 years of loyalty.