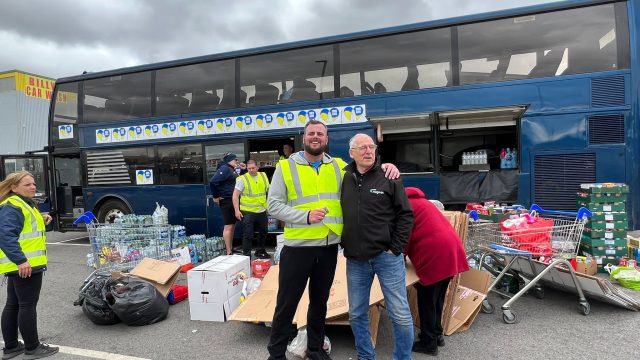 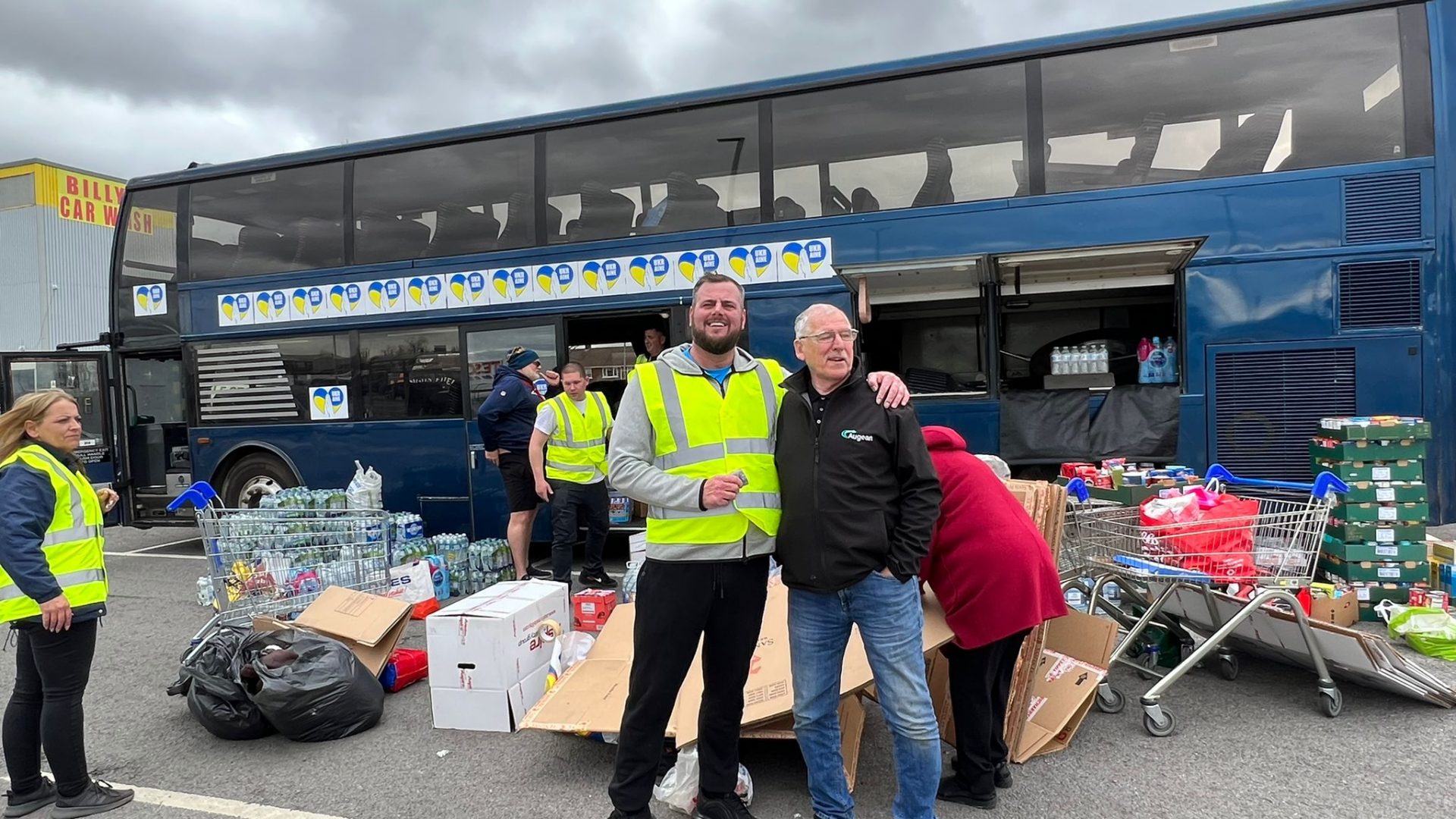 For many in the automotive industry, the war in Ukraine means additional struggles on production lines that are already battling global shortages.

However, for one group of car dealers in the North East of England, the crisis is far more personal after they travelled out and experienced it first-hand.

Back in April, Car Dealer reported how a group of second-hand dealers travelled to the Ukraine-Poland border in a double decker bus full of supplies.

The party also collected a bus-load of refugees and drove them to Frankfurt, from where they were rehomed.

Since we covered that story, the team, led by Shaun Maddren, have carried out another trip, dropping off essential supplies.

They have also raised £20,000 which has allowed them to book coach companies to carry out additional journeys on their behalf.

Maddren, 41, describes the experience as ‘heartbreaking’ and said his conscious would never have allowed him just to carry out one trip.

He was inspired to help out after hearing stories on the news about young children, the same age as his own, fleeing the war torn country.

The selfless work had a huge knock on-effect to his business, Teesside Trade Cars, but he and the other local car dealers involved say it was well worth the hit. 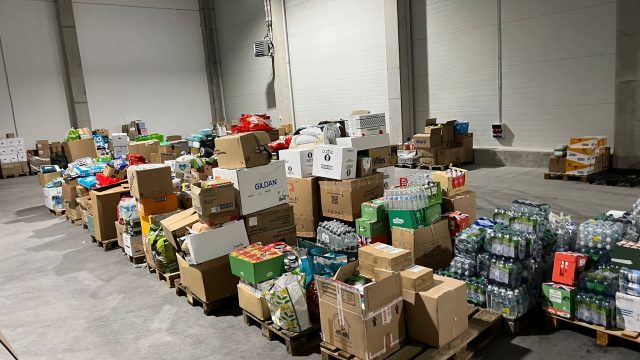 Aid delivered by the group of car dealers

He told Car Dealer: ‘I was on holiday in Tenerife and was watching the news, as everyone was when it all kicked off out there.

‘I was just seeing these women and children walking around on their own. I’ve got a two-year-old myself and just felt like I needed to do something.

‘It took over our lives to be fair, everything just took a back seat from our businesses to our families.

‘When we went over there we were on a bit of a wing and a prayer really. We were in this 28-year-old bus so basically if it broke we would have just been forced to walk away from it.

‘When we finally did managed to get there we brought over about five tonnes of aid which took about two hours to unload with all these Ukrainian guys who filled a load of Sprinter vans.

‘We took things like nappies, women’s stuff, food and clothes. Everything you could imagine really but we had no connections to help people and bring them to the safety of other countries, which was our main goal.

‘Luckily as we crossed back into Poland we met a driver and he told us where the refugee camp was. It was at that point the coach broke down right on the border but luckily it was just an electrical fault and we were able to get it driving perfectly!’ 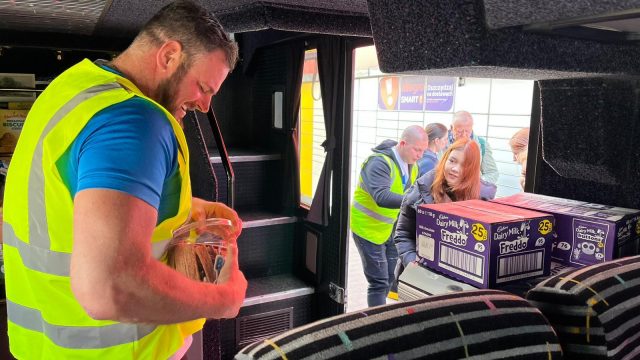 Shaun dishes out sweets as Ukrainians enter the double decker

He added: ‘Our contact got in touch to tell us we had 50 people waiting at this refugee camp, all women and children.

‘We didn’t know what to expect but we went to this place called Chelm and all of a sudden you just saw all these people looking at you. Women and children mainly.

‘They just had carrier bags and suitcases and a few had the odd cat or dog. My brother actually had to walk out because it was heartbreaking.

‘You think you’re a rough and ready lad until you see stuff like that. All these lost people just brought it all to reality.

‘We ended up taking a load to Frankfurt which was an 18 hour trip to a resettlement zone. There were so many people that were scared, frightened and lost.

‘It was awful, really heartbreaking stuff but within an hour all the kids were playing with toys and what have you and you would never have guessed they were from a war-torn country.

‘I just said I would have to come back. There was no way I could only do one trip.’ 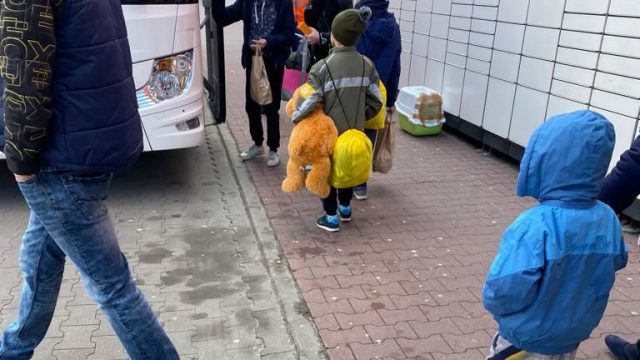 Young children wait to board the trip away from Ukraine

The second trip, which took place shortly after the first, came as the situation in Ukraine deteriorated further.

Aid teams were desperate for long-life foods so Shaun and his hardy team of dealers loaded up two coach loads of goods and headed back for the border.

However, they were then told to head straight to the nearby refugee camp, which was struggling to feed the fleeing masses.

The two coaches took around ten tonnes of food with them before collecting yet more refugees and taking them to a resettlement camp, in Kessel, Germany.

Shaun says the he was almost overcome when a mother emotionally thanked him for making her and her children smile for the first time in weeks.

He also hit out at the UK Government, who he says could have done more to help those fleeing. 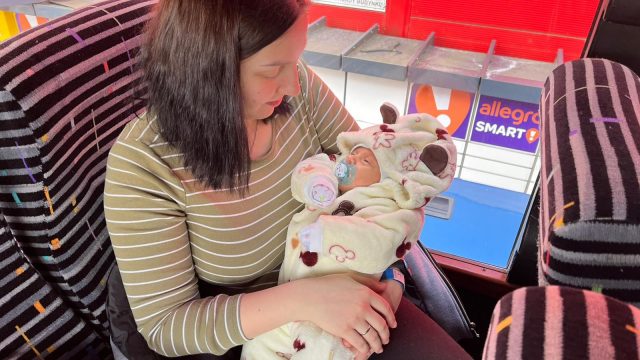 A mother and baby on board the coach

‘On one of the trips we met a group from Northern Ireland,’ he told Car Dealer.

‘They told us that on one of their trips they had been forced to basically sail right around Britain because they had been warned they could have been arrested for people smuggling. It’s ridiculous.

‘The scenes really do stay with you. On the second trip I was making hot chocolate for a lady and her kids and she told me it was the first time they had smiled in weeks.

‘They couldn’t believe that we were just a group of car dealers who wanted to help out.

‘I just told them that if it were my children I would like to believe that someone out there would do the same for me.’

Anyone interested in helping the Ukrainian war effort can donate to a special appeal set up by British Red Cross.