Home > News > How much profit do car manufacturers make on new cars? The truth versus perception

How much profit do car manufacturers make on new cars? The truth versus perception

The majority of car buyers think car manufacturers earn between 10 and 20 per cent on every new car they make.

In an exclusive survey for Car Dealer, What Car? asked 1,500 people what percentage of a new car sale they thought was profit.

Some 23 per cent of them believed car manufacturers earned between 10 and 20 per cent while 21.3 per cent believed it was around five to 10 per cent.

Of those surveyed, a quarter (25.8 per cent) thought car makers earn upwards of 30 per cent profit.

The reality is a somewhat mixed picture and varies by manufacturer and model.

While some lucky prestige models can earn the maker upwards of 20 per cent, other mainstream models generate the factory owners margins in the low single digits.

What Car? editorial director Jim Holder says that for the ‘vast majority’ of car manufacturers it is ‘not the licence to print money that many think it is’.

He said: ‘The bottom line is that car manufacturing and car retailing is ridiculously tough, with even best-in-class margins around 20 per cent, very healthy margins around 10 per cent and some operating in the low single digit zone, after spending billions on research, development, infrastructure and more.

‘While nobody is going to get a violin out for the firms involved given the sizeable profits they can and often do rack up off the back of the scale of the sales they make despite the margins, it’s worth remembering that many car makers and retailers, especially at the mass market end, live a knife-edge existence, looking to scrape decent margins while scrapping for sales in an ultra-competitive market, all the while under pressure on material and labour costs, tightening legislation and more.’ 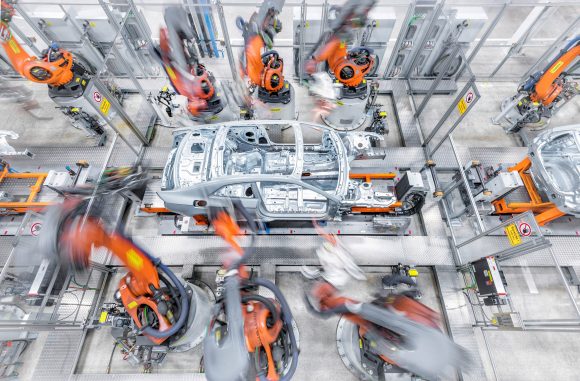 He told Car Dealer: ‘It depends on what brand and what model you are talking about.

‘The premium brands tend to do very well indeed when you analyse margin per vehicle – even after they have added bells and whistles.

‘There’s a reason why BMW and Mercedes make big profits while the mass market brands struggle.

‘Porsche is generally considered to be a manufacturer with industry leading margins – estimated at 20 per cent or more of the retail price.

‘The margins on high volume cars are much lower, especially small cars such as the Ford Fiesta or Vauxhall Corsa. They could be under one per cent which, while low, means the car manages to wash its face on volume.’

Holder added: ‘It must be slightly galling to look on at the amount of hard work that goes into producing and selling a car and think that so many customers think the rewards are so much greater than they really are.’

But this year that has improved, he said, thanks to a combination of discounts disappearing and a tendency to produce higher margin models due to semiconductor chip shortages.

He said: ‘Making fewer cars and not chasing volume has meant, perhaps oddly, that car industry margins in the first half of 2021 were amongst the highest in decades.

‘Costs have been trimmed in some cases by firms dropping features on some models.

‘Overall, profit margins ran at around 10 per cent in the first half of 2021, almost double usual figures.’

He explained a number of car firms – including Ford, Nissan, Stellantis and VW – have posted strong results in recent months and all are aiming to maintain higher margins.

How much profit do car dealers make on new and used cars? Find out here.