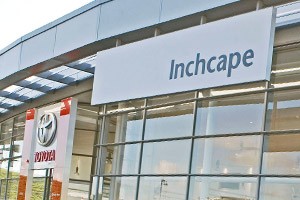 Inchcape profits fall 2.6 per cent as pressures in the retail market continue

INCHCAPE recorded a 2.6 per cent decline in profit before tax last year due to continued challenges in the the retail car market.

Reported profit before tax, however, using ‘actual currency’ as opposed to ‘constant currency’, was down a hefty 64 per cent to £132.1 million.

In the UK and Europe, Inchcape saw a four per cent sales decline and trading profit fell by 72 per cent due to margins falling to 0.5 per cent.

The group commented: ‘Our UK business has seen a seven per cent market decline in new car volumes, but more importantly a further 30 per cent contraction in diesel new car volumes.

‘The has led to an over-supply of diesel new car product in the market. In addition, the new WLTP led to supply shortages of certain models in the second half of the year given delays in product testing.

‘Inchcape’s OEM brand exposure emphasised the impact of both trends to the business in comparison to the wider market. These trends, alongside negative operational gearing, weakened our margins over the year.’

However, Brexit is still on the company’s radar and it predicts that any impact on trading with the UK will only risk further disruption to car retailing.

In its trading statement, Inchcape added: ‘Whilst the UK market remains challenging, we have started 2019 with a cleaner stock profile, improved centralised processes and have actions under way to rationalise our cost base.

‘Similarly, in Australia, the market remains pressured, but we are also looking at our cost base and are driving our Ignite initiatives even harder. Russia’s phasing is likely to see a slower first half given VAT changes in the market. Any impact to trading from Brexit would however be a further risk to this retail performance.’

‘These factors were partially offset by the delivery of near-record profit in Russia Retail, as we benefited strongly from Ignite initiatives undertaken in the market. Strategic initiatives, focused on rationalising our cost base, are underway to improve our retail segment performance in 2019.’