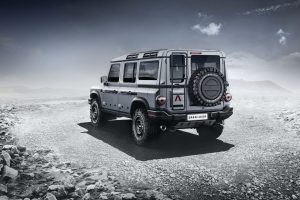 The Ineos Grenadier off roader is likely to be built in France – not the UK as previously planned – after the company made a formal offer for a Mercedes factory.

Billionaire Sir Jim Ratcliffe’s Ineos automotive arm has made a formal offer to Daimler to buy the Smart car factory in Hambach, north-east France which was put up for sale in June.

However, the Telegraph reported that last month talks had emerged between Ineos and Daimler about taking on the factory near the German border.

Ineos has now confirmed that its talks with Daimler have resulted in an offer which the firm is confident will be agreed.

Ineos said: ‘It’s a great solution for Ineos, with a highly experienced workforce and an excellent track record amongst Mercedes plants for the quality of its product output.’

Sir Jim’s company said that discussions came about because of ‘opportunities thrown up by Covid-19’.

Earlier this month, Jaguar Land Rover failed in its bid to register the shapes of versions of the Land Rover Defender as trademarks.

It had lodged a High Court appeal after making unsuccessful trademark applications to the UK Intellectual Property Office for the shapes of the Defender 90 and Defender 110.