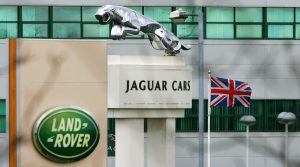 JAGUAR Land Rover has unveiled another quarter of hefty losses as Brexit uncertainty and slowing demand in China continue to weigh on the group.

Britain’s biggest car maker, owned by Indian conglomerate Tata, booked a £273m loss in the three months to December 31, which follows a £90m loss in the previous quarter.

However, it also recorded a £3.1bn impairment charge as it wrote down the value of its plants and other assets, citing muted demand and technological and regulatory headwinds.

It sent the firm to an overall pre-tax loss of £3.4bn for the quarter.

Revenue came in at £6.2bn as the firm sold 144,602 vehicles in the period – a decline of 6.4 per cent primarily as a result of ‘continued challenging market conditions in China’.

‘We continue to work closely with Chinese retailers to respond to current market conditions.’

In China, demand has been adversely impacted by consumer uncertainty following import duty changes and escalating trade tensions with the US.

The firm has also been stung by the introduction of European emissions standards, which have resulted in a fall in demand for diesel cars.

Brexit is weighing on the firm as well. The car giant is to stop production at UK manufacturing sites from April 8 to 12, shortly after the UK leaves the EU.

JLR employs just under 39,000 workers at sites including Castle Bromwich, Solihull and Wolverhampton in the West Midlands, and Halewood on Merseyside.

It is also to shed 4,500 jobs as part of a £2.5bn cost-cutting drive. Most of the job losses are expected to be in the UK, with a voluntary redundancy programme being launched.

‘This is a difficult time for the industry, but we remain focused on ensuring sustainable and profitable growth, and making targeted investments, that will secure our business in the future,’ Speth added.