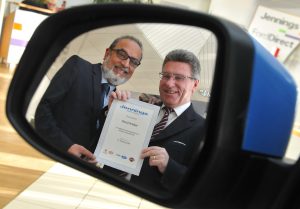 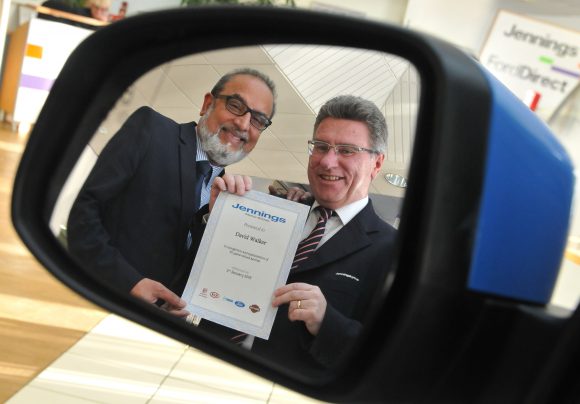 A DEDICATED manager at Jennings Ford Direct has been recognised for reaching a long-service landmark.

David Walker, from Ingleby Barwick in Teesside, has been with parent company Jennings Motor Group for 30 years and is the first of 28 employees this year being rewarded for a combined 695 years’ loyalty.

To mark his achievement, he received an official certificate and high street vouchers from group managing director Nas Khan, who said: ‘I would like to congratulate David for his continuous commitment and hard work over the past three decades.’

Employees are rewarded after achieving 15 years’ loyalty, then again after every additional five years’ service.

Walker’s career with the company began in 1988 when he was appointed as a sales controller at the group’s Yarm Road dealership in Stockton.

Within a few years he was promoted to sales manager, and in 2003 received a second promotion and transferred to the group’s Ford Direct site in Newcastle Road, South Shields, to take on the role of general sales manager.

He also spent a couple of years managing the group’s former Ford dealership in Riverside Road in Sunderland, before transferring back to the south Tyneside dealership in 2008.

Walker said: ‘The loyalty reward scheme is a good incentive for staff. To have your hard work recognised in such a rewarding way as this is great.

‘It’s been a pleasure working for the company over the past three decades, during which time I’ve also witnessed a number of changes, the most significant being the advanced changes in technology.’

Khan added: ‘This year, as in previous years, we have a substantial number of staff who will be rewarded in recognition of achieving landmarks of anything from 15 years to 45 years.’

The longest-serving member of staff is parts sales executive Alan Etherington, also based at the group’s South Shields dealership, who celebrated 50 years’ loyalty in 2017.

Pictured at top: Nas Khan presents David Walker with his certificate honouring his 30 years of service with Jennings Motor Group