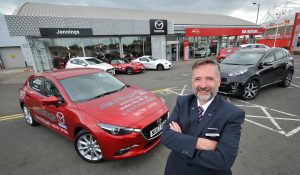 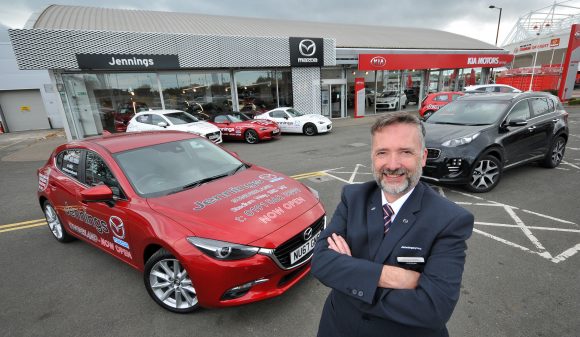 A NEW Kia and Mazda dealership in Sunderland has resulted in dedicated Jennings Motor Group employee James Chorlton being transferred and made general sales manager – his third promotion within the company.

Chorlton has moved across from the group’s existing Mazda dealership in Middlesbrough, where he was franchise manager for 10 years, to the recently opened Kia and Mazda showroom. He will be responsible for the day-to-day running of the dealership, achieving monthly and quarterly sales objectives for both manufacturers, liaising with customers plus overseeing an eight-strong staff team.

He said: ‘I’m delighted to have been given another opportunity to further progress my career within the company and look forward to building the Mazda and Kia brands in Wearside.

‘The new dealership is in a prominent location directly adjacent to Sunderland Football Club’s Stadium of Light, and already new car sales have got off to a good start with a number of customers having already taken delivery of their new Mazda and Kia cars.’

The 52-year-old began his career with Jennings as a sales executive at the company’s former Ford dealership at Neville’s Cross in Durham in 2000. A promotion to sales controller/business manager was soon on the cards when the company introduced Mazda to its portfolio of dealerships and launched a site in Washington.

September 2006 witnessed another transfer for Chorlton when he relocated to the company’s former Riverside Road dealership in Sunderland, before receiving a second promotion to franchise manager and transferring to the group’s Mazda dealership in Middlesbrough.

On SuperUnleaded.com: Lovely jubbly! Only Fools and Horses Reliant Regal sells for £41,625