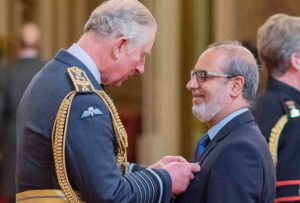 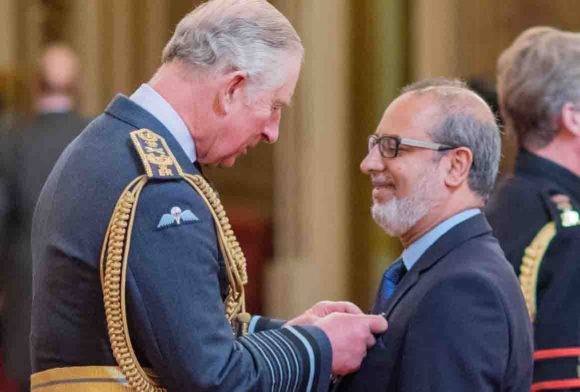 THE boss of north-east based Jennings Motor Group has received an OBE from the Prince of Wales.

Pakistan-born Nas Khan was appointed an Officer of the Order of the British Empire (OBE) for his charity work and contribution to the economy.

Khan, the owner and MD of Jennings group, said: ‘It’s a tremendous honour to receive such an award – I am very humbled and extremely honoured.

‘The day was very exciting and it was great meeting other award recipients at the ceremony.

‘I was also thrilled that members of my family were able to share such a momentous occasion with me – given the support they have given over the years.’ 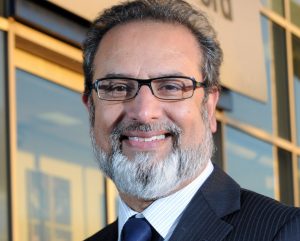 As an individual, Khan has always actively supported both local and national charities, but the most poignant and challenging came about in 2010, when he wanted to help save and rebuild lives of people in Pakistan, following devastating floods. An appeal was set up through his own registered charity, The Emaan Foundation.

Raising £120,000 not only provided essential life-saving aid in the immediate aftermath of the disaster, but it also financed the construction of a new village. A total of 60 new homes were built for people in the village of Rahim Yar Khan, with livestock and fresh water also being provided.

On completion of the village, which has officially been named ‘The Emaan Village’ after the charity, Nas launched a second appeal with the aim of building a health centre for the village community and surrounding areas.  To date, more than £20,000 has been raised.

Khan’s career with Jennings began as a graduate at the age of 23 when he was appointed as a sales executive at the group’s Ford dealership in Yarm Road, Stockton, Teesside. The next decade saw a number of promotions to business manager, assistant sales manager and group sales/marketing manager.

He has been involved in three successful management buyouts, the first of which resulted in another promotion to sales and marketing director, prior to taking over as managing director and later becoming sole proprietor of the company.

As managing director of Jennings Motor Group, Khan is responsible for 524 members of staff across the company’s Ford, Kia, Mazda, Seat and Mitsubishi branches located from Tyneside to Teesside, in addition to recently adding Harley-Davidson dealerships in Leeds and Gateshead, as well as a Subway store in Stockton to the business portfolio.

In addition to being awarded an OBE, Khan has also been the recipient of Ford Motor Company’s ‘Salute to Dealers’ global award, as well as being awarded Teesside Business Executive of the Year at the North East Business Awards.

MORE: Changes to VED rules could give used car dealers the upper hand

On SuperUnleaded.com: No Hay! Lucky Escape As Lorry Spills Bales After Taking Corner Too Quickly