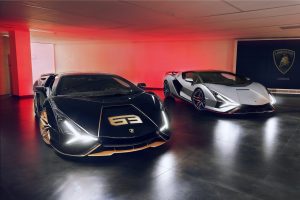 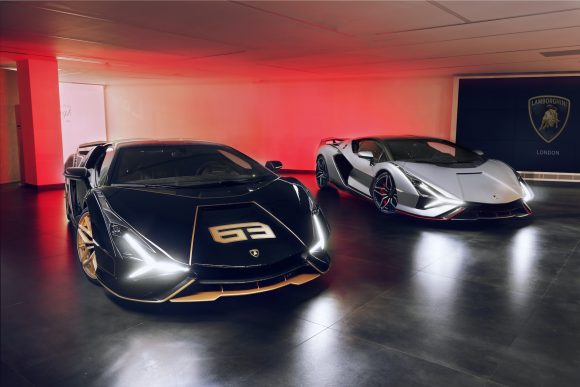 Lamborghini London has marked the arrival of two super-rare Sian models in the UK with a world-first twin photoshoot.

The H.R. Owen-operated showroom is handling the sale of the only three Sians coming to the UK, out of a total production run of 63 cars worldwide.

Each of the 63 Sians will be individually styled by their owners in conjunction with Lamborghini’s design centre and ‘Ad Personam’ personalisation department.

The special photoshoot shows off the first two cars sold by Lamborghini London. 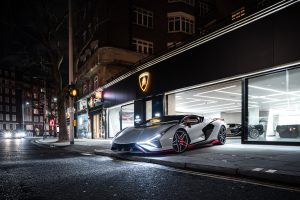 The lighter of the two is finished in a Grigio Nimbus with exposed carbon weave roof and Rosso Mars accents, complemented by a Nero Ade interior with Rosso Alala contrasts.

Additional highlights are finished in Oro Electrum, which is also used within the alloy wheels, themselves set within bespoke Pirelli tyres, with white detailing. The interior mirrors the bodywork with Nero Ade base leather and Oro Electrum stitching and highlights.

The Sian is the most powerful and fastest accelerating Lamborghini ever produced, using a world-first hybrid supercapacitor powertrain. 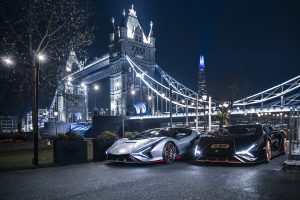 Unlike other electrified cars, the Sian uses a lightweight supercapacitor that’s fully charged every time the car brakes.

The Italian company unveiled the Sian at the 2019 Geneva Motor Show, with the capped 63-car production run referencing the year Lamborghini was founded. The Sian coupe will also be joined by a roaster version that’s limited to just nineteen cars.