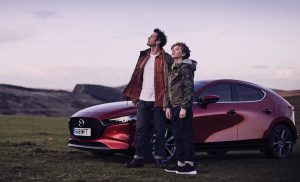 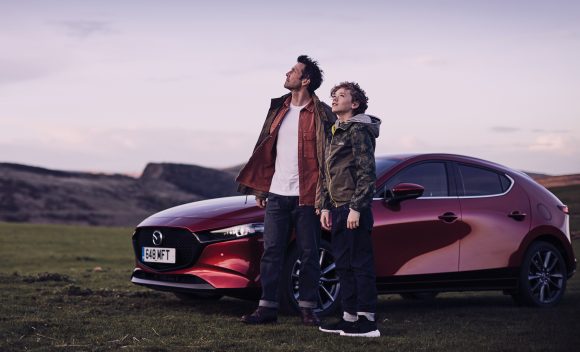 We go behind the scenes with Mazda as TV idents for its new 3 hatchback are filmed.

LIFE doesn’t offer many opportunities to ponder the question: ‘How on earth did I get here?’

But standing in a tiny gazebo in the freezing cold (yet mesmerisingly beautiful) Peak District, being pelted by rain from all angles, surrounded by expensive camera gear and with two VERY angry sheep farmers threatening to drive into a new Mazda3 (one of the first in the UK) that’s blocking their path, I can’t help but ask myself that very question.

Just a standard Thursday as a Car Dealer reporter, right? Hardly, but it at least shows the difficulty and hardship involved in getting the right advertising material. First though, some background. This is Mazda’s all-new 3 – one of its staple offerings that rivals cars such as the Ford Focus. And a new car means you need the right material to make consumers admire it and consider buying one – whether that be brochures, social media content, or why I’m here today: to see a new TV ad being made.

But this is no normal TV advert. We’re here to make a series of idents, which are the short bursts that cut in at the start and end of every commercial break. Think ‘Mystery Drama on ITV, sponsored by the new Skoda Superb’ and you’ll be along the right lines. 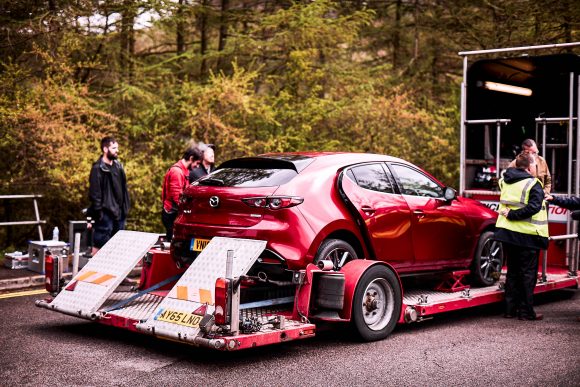 A special trailer is used so interior shots can be obtained while on the move. A viewer would think the car’s tyres were in contact with the road!

Regular viewers of Film4’s prime 9pm slot might have noticed it’s Mazda that owns the property – yes, that’s what the slots are referred to – and it has been showcasing its CX-5 SUV and MX-5 roadster since July last year, with the message, ‘Together is a wonderful place to be’.

Producing idents has its own challenges. You see, it’s a tough gig even getting your adverts to Film4. They have to fit Channel 4’s ethos and can carry no advertising messages – so no website mentions, no finance deals, etc – and they usually tell a story. Across each film, there’s hardly a minute of screen time in total, which is broken up into even smaller chunks to bookend each advert break.

The pitching process is also nightmare-inducing. Film4 approaches manufacturers out of the blue to announce it has a property up for grabs, with a two-week deadline for firms to get their ideas in.

‘No one knows what the outcome will be and you just try to win by putting your best offer forward. It’s like buying a house with sealed bids at an auction,’ Claire Andrews, marketing director at Mazda UK, tells us.

Mazda won the most recent property to become available, which is why I find myself in the picturesque Peak District admiring the tranquil countryside juxtaposed with the hectic nature of the first day of shooting.

But while it might seem manic – particularly as the filming is being done while dodging torrential rain showers – it’s actually all impeccably well organised. 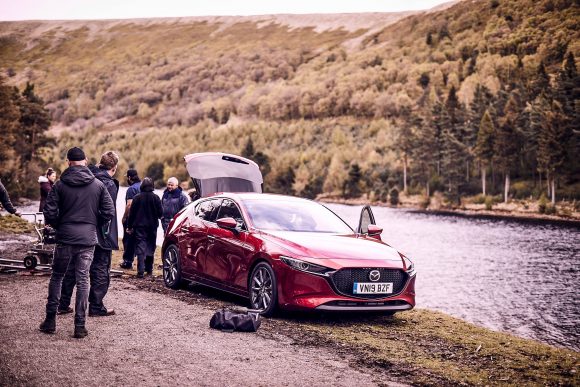 Up to 10 different agencies are involved in both the planning and production stages, alongside the team at Mazda. The operation has to run like clockwork – particularly with more than 40 staff in attendance, who range from camera operators through to ambulance staff. The level of effort that goes into producing just a minute or so of TV advertising is incredible.

And then there’s the expense. Unsurprisingly, Andrews is reluctant to tell me how much money is needed to create and run the adverts – she’ll only confirm ‘it’s a significant investment because it’s television’.

The day starts in a layby with a Mazda3 stuck on the back of a specially adapted truck that has a huge camera mounted alongside. It’s here that the detailed interior shots are caught. It helps to stabilise things while the truck is moving, and the end result looks incredibly realistic as we watch it back on a monitor that’s meant to broadcast live what’s being filmed.

But in the rural Peak District, where the phone signal is as sketchy as our political future, we only catch the occasional image.

The lorry runs up and down the same stretch of road, which is closed to traffic for a few minutes each time, until the perfect shot is captured.

After a busy morning, the lunchtime bells ring and we head to another layby where a glorified burger van awaits with piping hot food ready to be served.

After a hearty chicken casserole and apple pie, I ask Andrews how filming is going so far – bearing in mind that the weather has been decidedly on the damp side. 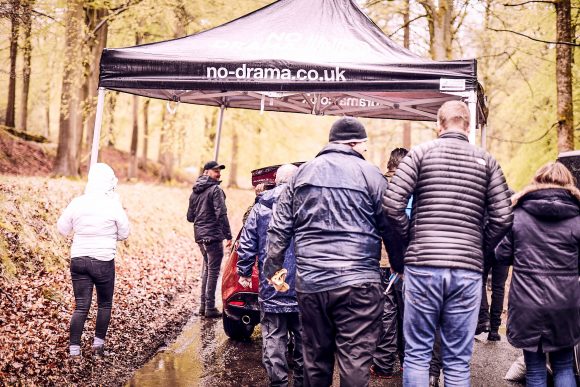 Much of the action was being shot near the picturesque Howden Reservoir. The scenery was lovely but the weather certainly wasn’t…

‘What we shoot and when we shoot is always weather-dependent, but when you get a break in the rain you’ve just got to get on with it. Everyone has pulled together to get the performance out, but the most important thing is that we get the car looking great in every shot,’ she says.

Next we’re off to the beautiful Howden Reservoir, which is the setting for a touching father-and-son moment that’s part of the story.

That’s the narrative at the heart of the whole thing – father and son escaping to a beautiful part of the world and with a great car transporting them there, as pictured at top. I arrive after it’s all been set up – complete with a track for the camera to scoot down to get a smooth shot zooming in on the duo.

It’s here where we encounter the angry farmers, who aren’t expecting 40 film crew and a sparkling new Mazda3 to be blocking their way.

A snarly exchange and threat of the farmers’ ancient tractor being rammed into the new car later and, unsurprisingly, this part of the shoot is wrapped up pretty quickly.

From here, we head to the final location – an unglamorous farmyard (luckily not connected to our previous encounter). It’s at the top of a hill with some fantastic sweeping corners up to it, which is a perfect location for getting some stunning road shots.

This is where my favourite bit of kit of the day is rolled out – a Mercedes ML55 AMG equipped with a ‘Russian arm’. The car helped film James Bond scenes and has been completely gutted inside. It features a number of monitors and the controls for the ‘arm’, which is what the camera is attached to. The ‘arm’ essentially leans out to get the wide shots you wouldn’t be able to otherwise achieve on a narrow stretch of road. 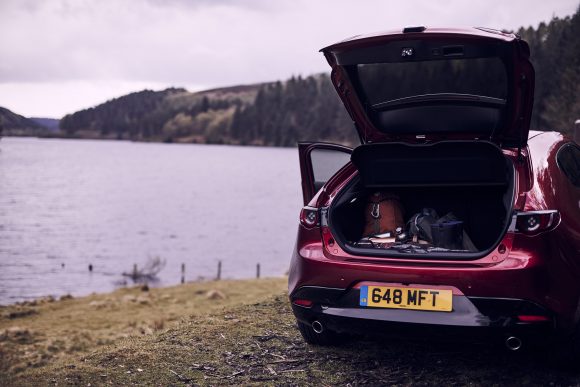 Here’s where another issue is encountered. The problem is this sweeping road might look beautiful but it’s also incredibly steep, and to use the brake lights can ruin a shot.

In the past, a technician would play with a few cables to ensure the brake lights remained off, but with cars getting more and more complicated, it seems this is no longer an easy ask. The solution? Leave it in first gear… I hop in with Stuart Hale, a precision driver (cool job) who has the task of making a car look as composed as possible in shots. This isn’t the easiest of tasks when a Mazda3 is running down a steep hill in first gear at 30mph. Thankfully, they aren’t filming sound, but the end result is superb.

The whole process might seem a bit over the top given the short amount of time the car is on screen, but it’s worth considering the advert’s reach. I’m told that over a 12-month period 28 million adults see the idents and that this is the ‘most cost-effective way to advertise’.

Andrews says: ‘We have a massive, massive audience through the sponsorship, and that’s why we’ve gone down this avenue.

‘Mazda still has some awareness issues, and we’re not necessarily at the front of people’s minds, so what we try to do is get our cars in front of our target audience and ensure that our messages are right for them. We’ve had great results so far from the sponsorship.’

Mazda has previously commissioned independent research and, using the MX-5 as an example, data showed that viewers were twice as likely to buy the firm’s two-seat roadster having been exposed to the idents.

This level of crew, the planning involved and the sheer cost of both producing the films and running them on Film4 might seem excessive, but given there’s a clear link to the adverts raising Mazda’s brand awareness, and hopefully transferring across to more sales, it would certainly seem to be worth it.

I leave the Peak District mesmerised by the talent and effort that goes in to producing these idents, and urge anyone who takes manufacturer marketing material for granted to take a step back and appreciate what goes on behind the scenes.

If you haven’t seen the idents yet, I thoroughly recommend watching how seamlessly the whole package is brought together – even if that means sitting through Kung Fu Panda 2 or Titanic for
the tenth time…