LG invests billions in electric car battery production in US

LG Energy Solution has said it will invest more than $4.5bn (£3.2bn) in its US battery production business by 2025 as car makers ramp up production of electric vehicles.

The Korean company, which has a joint venture with General Motors (GM), said the investment will help create 10,000 jobs, including subcontractors.

GM and LG are currently building a $2.3bn (£1.6bn) battery factory in Lordstown, Ohio, near Cleveland, that will employ about 1,000 people when it is completed in 2022.

New logo for Renault from 2024

A new interpretation of Renault’s diamond design, the ‘flat’ logo has been created to ensure that it’s more easily displayed on video or through digital media. The flat treatment also, according to Renault, means that it can be more easily animated.

The new logo will be ‘gradually’ applied to Renault vehicles and by 2024 will feature on all of the firm’s new models.

Business Secretary in talks with unions over Liberty Steel

The Business Secretary has held talks with union leaders to discuss the future of a steel company and thousands of jobs.

Kwasi Kwarteng said he had a ‘constructive’ meeting on Friday evening with officials from Community, the GMB and Unite over the situation at Liberty Steel.

Liberty’s future is the subject of speculation after specialist bank Greensill Capital went into administration as it was the main lender to Sanjeev Gupta’s GFG Alliance, which includes Liberty Steel, and owns steel plants across the UK. 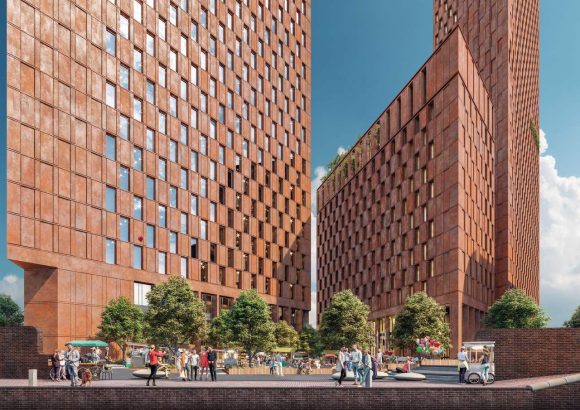 Plans for what is thought to be a world-first carbon neutral skyscraper development to be built in Birmingham have been proposed.

Developers of the Curzon Wharf proposals, put to public consultation from Friday, have claimed its green and energy-efficient credentials would make it the first mixed-use build of its kind anywhere in the world.

Plans by the Woodbourne Group include three residential towers, including two skyscrapers, and a separate office block, proposed as a life sciences hub filled with laboratory and research and development space.

London’s biggest companies made progress towards better representation for ethnic minorities among their boards in 2020, as racial equality protests spread across the world.

A new survey shows that the number of FTSE 100 companies who had at least one director for an ethnic minority group on their board grew from 54 to 81.

It marks rapid progress at the top level of the business world between January 2020 and March 2021, however still leaves 16 companies who have no ethnic minority representation on their boards.

Some £380bn was added to the combined value of homes compared with 2019, Savills said.

Despite the financial fallout from the coronavirus pandemic, it marked the strongest growth since 2015.

Commercial property business Hammerson has written down the value of its shopping centres and stores by nearly £2bn as Covid-19 saw rental income suffer the biggest fall in the company’s history.

Bosses at the company, which owns Birmingham’s Bullring and London’s Brent Cross, said its properties were worth £6.34bn at the end of 2020 compared with £8.33bn a year earlier.

The UK was the worst affected, with flagship sites and retail parks suffering like-for-like declines of 51 per cent and 42 per cent respectively, compared to 18 per cent falls in France and 30 per cent drops in Ireland.

London’s top index outperformed many of its global peers for the first time all week as it prepared for the weekend with a healthy rise. The FTSE 100 closed the day up 24.51 points or 0.4 per cent to 6,761.47.

The index has not joined its counterparts in Europe and the US as they charged ahead through much of this week.

Friday was very different though, with only the Dow Jones in New York, up 0.4 per cent when markets closed in Europe, pulling ahead of the top 100 companies in London.

Expect the blustery winds to continue through the weekend. There will be rain early on in the day but this will clear with some showers continuing through the North and East.

This will turn to hail in some places but for the South and East it will be brighter, however still with some showers.

The wind speed will get up to 50mph in some places, being blown in from the Atlantic, meaning it will feel very cold still.

New car sales will rise in Q2 thanks to pent-up demand, but don’t expect return to booming days of Summer 2020