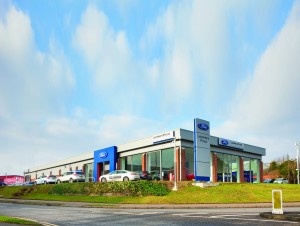 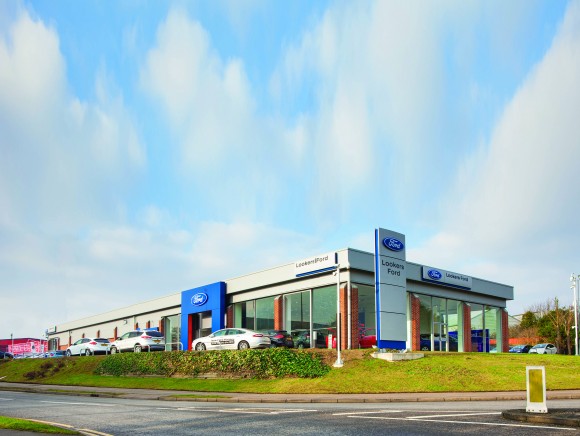 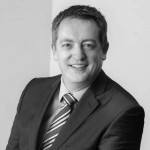 August proved a good month for the majority of UK listed motor retailers.

With the exception of Inchcape, which has been hit by the same global uncertainty as that which is depressing the FTSE100, the car dealer stocks made significant gains in the month on the back of continued strong trading updates, continued record registration levels and more consolidation.

The largest mover in the month was Lookers, which received a significant boost following the announcement of the deal to acquire Benfield. As with all stocks, the car dealers saw a significant fall in the middle of August as the market reacted to global economic uncertainties.

With the exception of Inchcape, the shares bounced back quickly as the impact on UK dealers’ fortunes was reassessed and the share price growth has continued since then.

Lookers announced a strong set of results for  the first half of 2015, beating a strong set of comparatives and analyst expectations. Revenues were up nine per cent year-on-year, with adjusted PBT up more than seven per cent.

On the back of this, Lookers continued the recent trend of all listed stocks, increasing its interim dividend by 10 per cent on the prior year.

Marshall made its first results announcement  since admission to the stock market, with a  strong performance for the first six months of  2015. 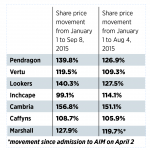 Revenue was up 16 per cent year-on-year,  with profit before tax up just under 10 per cent for the same period. Vertu announced a pre-close statement for the five months to July 31, building on the back of the strong full-year performance for 2014/15.

While we will see the full half-year numbers in the middle of October, revenues are growing across the board and the company is trading  in line with upgraded expectations when it announced final results in May.

Cambria also announced a confident trading update for the 11 months to July 31.

The second half of the year is apparently progressing well against the prior year comparative and the company is expecting to beat market expectations when it announces its full-year results.

All these announcements continue the trend of positive trading results, with the listed dealer groups able to manage the self-registration pressure and deliver enhanced earnings.

Lookers shocked the industry with its £87.5m acquisition of Benfield Motors, adding 30 dealerships to the group. Given that Lookers COO Nigel McMinn’s prior role was CEO of Benfield, there should be slightly less surprise and a significant head-start on integration compared with most transactions.

While the headline goodwill payment at circa £32.5m (dependent on Benfield’s current year trading performance) looks quite high, the fact that Benfield had not revalued any properties and had an amortisation and depreciation charge of £4.3m in 2014 will bring this down to approximately twice EBITDA.

In addition to this transaction, Inchcape has acquired the Yorkshire-based Land Rover dealership Armstrong Massey.

While Inchcape has not disclosed the acquisition, it makes sense, given Inchcape’s ownership of the Jaguar retailer in York.