Home > News > Market Insight: A solid start to the year on the back of positive announcements 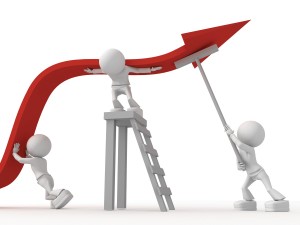 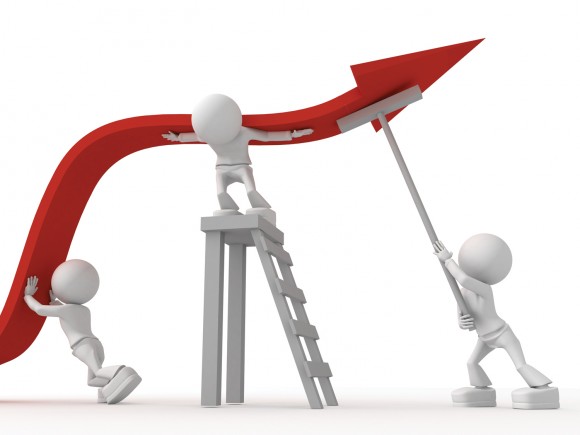 Market Insight: A solid start to the year on the back of positive announcements

January saw trading updates at both Pendragon and Cambria Automobiles, both of which saw an increase in share price. The market also learned the identity of the new chief executive officer at Inchcape, with Stefan Bomhard due to take up his post from April 1.

Share prices performed well over the month as a whole, albeit on relatively modest volumes. Both Pendragon and Cambria saw positive movements on the back of recent trading announcements, with Lookers showing a strong and steady climb to a closing value of 149.75p per share, the highest since April 2014.

The softening in the Inchcape share price is not totally unexpected, given that it closed the year at an all-time high. It will be interesting to see how the market reacts to the preliminary announcements as they begin to be issued over the coming months.

Pendragon delivered a positive trading statement at the turn of the year, noting that full-year results are expected to be ahead of expectations. Strong performance in used cars was highlighted, together with an 18.8 per cent increase in website traffic in the fourth quarter, and even higher visits post-Christmas. 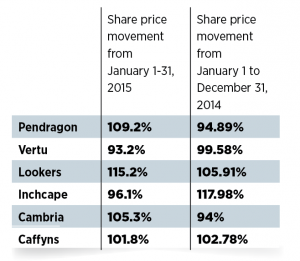 Activity on tablet and mobile devices was up 65 per cent, demonstrating that players with a strong on-line presence with good functionality are increasingly gaining traction. There are now 38 ‘Sell Your Car’ retail points operating in the UK in competition with ‘webuyanycar.com’, and this ability to source cars directly from consumers may be contributing to the overall positive performances on used cars. The trading statement also highlighted the purchase of leasehold dealership properties for £12.9 million, which will reduce the annual rent roll by some £1.3 million.

Cambria announced a trading performance for the first four months of the year (August year-end) substantially ahead of the prior year and highlighted strong profit improvement in absolute terms and on a like-for-like basis.

Aftersales also grew, with profitability 10.7 per cent higher than the previous year and up three per cent like-for-like. The performance of the Barnet Jaguar Land Rover dealership acquired in July 2014 was noted to be in line with expectations.

No major acquisitions were noted in the period, however, Pendragon announced that King Arthur Holdings Sarl, a company in which it has a five per cent investment, sold its only subsidiary, King Arthur Properties Sarl, which acted as the landlord to 73 properties operated by Pendragon, as car dealerships.

Pendragon expects to receive approximately £24m in respect of its original £10 million investment, generating an estimated non-recurring profit of £14 million, with the proceeds being used to reduce debt. The investment had been returning an underlying dividend income of circa £1.1 million. It was announced recently in the trade press that Vantage Motor Group had acquired the Stratstone Honda site in Bradford from Pendragon and plan to re-brand the site as ‘Vantage Honda – Bradford’.

Board composition and activity / directors’ holdings

The long-awaited announcement as to the successor to Andre Lacroix as chief executive officer of Inchcape plc was finally concluded, with Stefan Bomhard taking up the post from April 1, 2015. Inchcape have continued their tried and tested formula of appointing a chief executive outside of the sector, with Mr Bomhard having experience previously with Bacardi, Cadbury, Diageo, Unilever and Proctor & Gamble.