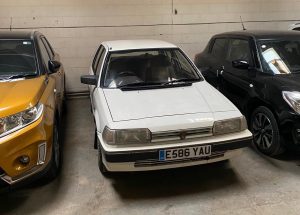 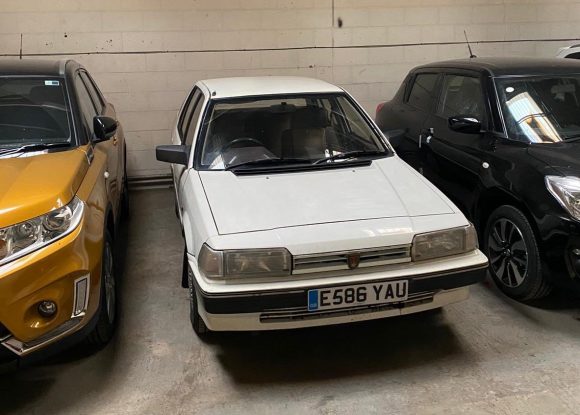 A Mazda dealer is receiving praise from car enthusiasts on social media after it saved a rare Rover 216 from the scrappage crusher.

Beechwood Mazda in Derby acquired the car after a customer purchased a new Mazda 2 through the Japanese car maker’s scrappage scheme.

As part of the agreement, customers can save up to £4,000 on a brand new Mazda that emits less than 161g/km of CO2 if they exchange a car that’s registered before 2011. 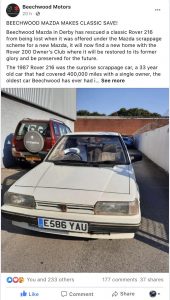 Just like the nationwide scrappage scheme of 2008, the Mazda offer then mandates the customer’s old car is scrapped.

However, staff at the dealership were overwhelmed by emotional car enthusiasts when it posted a photo of the car on social media.

One tweet said: ‘This car is double the age of our youngest sales executive Lucy.’

Dismayed petrolheads called for the Rover 216 to be saved and not be destroyed.

Once a familiar sight on UK roads, the now scarce Rover was registered in 1987 and has covered an incredible 402,000 miles with a single owner, making it the oldest car Beechwood has had to scrap under the scheme.

The dealership negotiated with Mazda Motors UK for the car to be saved and will now pass the car over to the Rover 200 Owners Club where it’ll be restored to its former glory.

‘We were really surprised by the scrappage car offered, it looked in good condition and had covered an incredible number of miles,’ said Rob Wood, Beechwood Mazda managing director.

‘But under the scrappage scheme we have to scrap cars, and there are no exceptions to this.

‘When we posted this on social media we were inundated with requests not to scrap the car. I had my technical guys take a look at it and they confirmed it was in good shape so we asked Mazda UK if we could change the terms of the sale to help save this classic, allowing us to give it a new lease of life.

‘I am pleased to say the change was agreed and will shortly be on its way to the Rover 200 Owners Club for restoration and hopefully pride of place in someone’s collection.

‘As a car retailer I feel we are responsible not only for selling new cars, but also preserving motoring heritage. We are pleased to have done our part to save just a little of British automotive history and I hope it goes on to be preserved for the future.’