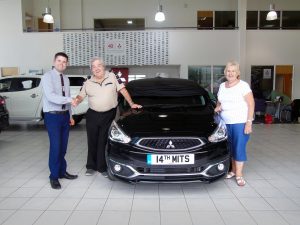 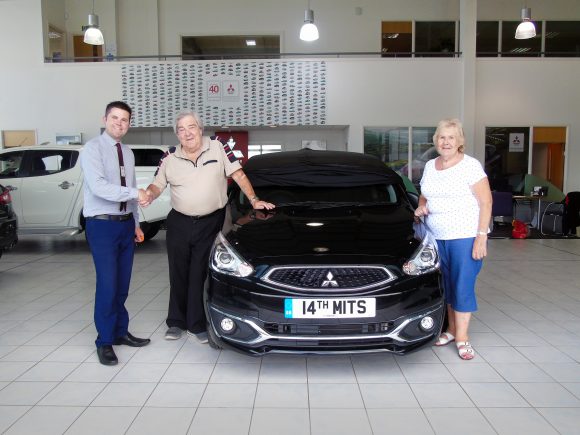 A RETIRED coach driver from Tewkesbury has taken delivery of his 14th Mitsubishi – 38 years since he bought his first one.

Cliff Hodson, 78, collected a 2016 Mirage from CCR Mitsubishi in Cheltenham, having remained loyal to the brand since buying a Colt from Gloucester’s Roger Head Motors in 1979.

Over the years, he and wife Ann have worked their way through a variety of Mitsubishi models, including the Sigma, Galant, Lancer, Spacestar, ASX and Mirage models, which span MPVs and saloons to hatchbacks and crossovers.

Hodson said his passion for the brand stemmed from the reliability and comfort of its cars. ‘The only issue I’ve ever had has been the coil failing on one of my first cars, and when I called out the AA the patrolman said he’d never been out to a Mitsubishi before! I like all the equipment too, and my passion for the brand has rubbed off on my family, with my daughter owning a Lancer and my granddaughter a small Colt.

‘If I won the lottery I’d still buy a Mitsubishi – I like the ASX the best and I’d be straight down to CCR for a new one. I’d also love an Evo and the chance to take one out on a racetrack!’

Hodson, whose career also included 15 years in the army, added: ‘CCR looks after us brilliantly and we’ve been going there for years. We know everybody on first-name terms.’

Leigh Gue, sales team leader at CCR Mitsubishi, said: ‘It’s been a pleasure to look after Cliff and Ann. They’re fantastic customers and we’d like to say a big thank-you to them for their loyalty. I’m sure they will enjoy their new Mirage as much as their previous Mitsubishis.’

Amanda Gibson, press and public relations manager at Mitsubishi Motors in the UK, said: ‘We’re delighted that Mr Hodson is so passionate about Mitsubishi, and with this year being the brand’s 100th anniversary it’s great to hear of customers who are so fond of our cars. We really appreciate his enthusiasm and wish him many more miles of happy Mitsubishi motoring.’

On SuperUnleaded.com: Here’s what not to do with your new car, especially if it’s a Ferrari