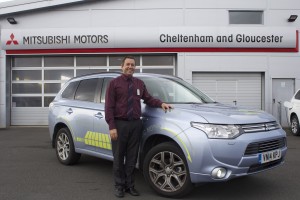 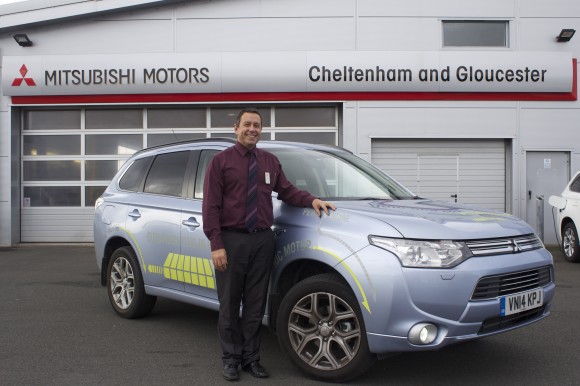 Earlier this year Mitsubishi Motors in the UK launched the Outlander PHEV, a plug-in hybrid vehicle, that uses both electric and petrol power. The Outlander PHEV can travel 32.5 miles on battery power, which is more than enough to accommodate most daily average journey distances, but owners would still be able to make use of the new charging points.

Dale Bedwell, pictured, brand manager at Cheltenham and Gloucester Mitsubishi in Staverton, believes the improved infrastructure will encourage more people to use environmentally friendly vehicles like the PHEV, which emits just 44g/km of CO2 and gives an official combined fuel consumption figure of 148mpg.

Dale said: ‘It’s great news that Cheltenham Borough Council and Gloucestershire County Council are bringing in more charging points for people with electric cars. The Outlander PHEV has already been a hugely popular car for us and we see it as the future of motoring for us.

‘The extra charging points will make it easier for people to drive vehicles that are better for the environment.’

Councillor Will Windsor-Clive, the cabinet member for transport at Gloucestershire County Council, said: ‘This is another step in building up the infrastructure for the city and the town. We need to kick-start the whole thing to work and in the long-term we expect it to be self-funding.

‘It’s one of those things we should be doing because it’s all part of making Gloucester and Cheltenham places people want to visit.’

The fast-charging points are planned for Montpellier Street by the Rotunda and Regent Arcade car park in Cheltenham and the Westgate and Eastgate car parks in Gloucester.

Two other locations are yet to be confirmed.

The rapid-charge points are planned for Compass Holidays near Cheltenham Railway Station, The Wharf House in Over, Gloucester and the Chase Hotel in Brockworth.