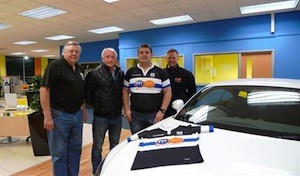 It will also fund the development of the junior and mini teams. The Motorpoint logo will appear on the post protectors as well as on advertising hoardings around the pitch.

Founded in the late 1920s by members of the Chingford Congregational Church, fans originally watched games from a Double Decker bus whilst players washed in a local piggery.

The club moved to its present site in the 1950s. Since then the London North 1 outfit have invested heavily in their clubhouse and general playing facilities.

The Chingford Ruby Club, which celebrates its 85thanniversary this year, still holds the record for being the first club in England to win their respective league by four games.

Mark Watkins, general manager, Motorpoint Chingford, said: ‘We’re delighted to have teamed up with Chingford Rugby Club for this season and look forward to playing our part in helping this famous club win London North 1 this season.’