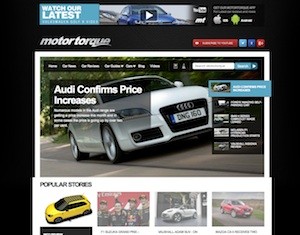 MOTORTORQUE has launched its very own print magazine, designed to connect car buyers to manufacturers.

Positioned as a men’s automotive and lifestyle ‘freemium’, the title will be distributed at strategic commuter hubs bi-annually, which coincides with the release of new vehicle registrations.

The only difference is, reviews, features and adverts will be accompanied by QR codes, short URLs and telephone numbers, allowing reads to quickly access further information, request a brochures and book test drives.

This will ultimately generate leads for advertisers and allow the magazine’s parent company, The Auto Network, to track and evaluate each enquiry from point of origin to point of sale.

Last week, the launch issue of Motortorque was distributed to 30,000 commuters at selected transport hubs across London. The aim is to eventually distribute more than 100,000 copies of each magazine to commuters in major cities including, Bristol, Birmingham, Glasgow, Liverpool and Manchester.

Managing director of The Auto Network, Anton Hanley, said: ‘Our intention is to close the loop between online and offline and in so doing improve the experience of both readers and advertisers.

‘A lot of agencies have been scratching their heads over how to connect up offline marketing with online activity but our online and offline versions of Motortorque will compliment each other seamlessly and intelligently.’