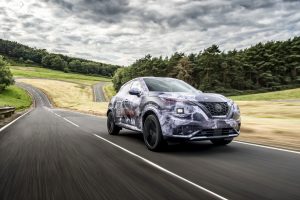 NISSAN today gave the world a glimpse of the upcoming new Juke undergoing the final stages of road testing ahead of its official unveiling in early September.

Pictured on the Millbrook testing track in the UK with a camouflaged exterior, it leaves elements of the new design to drivers’ imagination, but the updated version of the sub-compact crossover SUV – first produced by the Japanese manufacturer in 2010 and made in Sunderland for the European market – boasts a new look and what Nissan calls ‘agile driving performances’.

Ahead of the unveiling next month, Nissan said the new Juke will have sleek coupe lines plus 19-inch alloy wheels. It will also become the third Nissan model to feature the semi-autonomous ProPilot technology, which forms part of the Nissan Intelligent Mobility vision.

In addition, it will have greater ‘roominess’ and comfort for the driver and passengers.