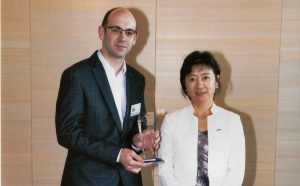 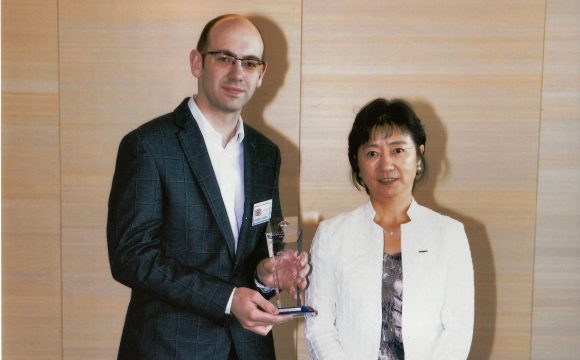 The family-owned-and-run business in Straiton was one of just 25 in the world to be recognised for its exceptional EV sales and representation across the past fiscal year.

Now in its 87th year of business, it became a Nissan dealership in 2006 and in 2011 was the first dealership in Scotland to sell an all-electric family vehicle – the Nissan Leaf.

The award was presented to sales executive and EV specialist Alastair Loudon by Asako Hoshino, executive vice-president and chairwoman of Nissan’s Global EV business, at a special ceremony in Japan.

As well as receiving the trophy, he enjoyed a six-day trip to Tokyo, which included an opportunity to visit the Nissan factory at Oppama and Nissan’s Global Technical Centre.

Loudon, who has worked at Alex F Noble for 11 years, said: ‘It was a huge honour not only for myself to receive the EV CEO Award on behalf of Alex F Noble Nissan, but also for everyone at the dealership to win this coveted accolade.’

Dealer principal David Noble said: ‘The winning of this award is well deserved for everyone on the dealership’s EV team. It’s a huge achievement for us and we are all incredibly proud that the consistent hard work and effort made by our staff has now been recognised globally.’