Nissan board to meet to discuss successor to Carlos Ghosn

NISSAN’S board was today meeting to pick a chairman to replace Carlos Ghosn, who was arrested last month on charges of violating financial regulations.

The meeting comes amid an unfolding scandal that threatens not only the Japanese automaker’s alliance with Renault SA of France and Mitsubishi but also its global brand, as well as highlighting shoddy governance at the manufacturer of the Leaf electric car.

Ghosn and fellow board member Greg Kelly were formally charged last week with falsifying financial reports in underreporting Ghosn’s income by about five billion yen (circa £35m) between 2011 and 2015.

They were arrested on November 19 by Tokyo prosecutors and remain in detention.

A source close to Ghosn’s family said he was innocent, as the alleged income was never decided upon or paid.

Aubrey Harwell, the US lawyer for Kelly, an American, says he is innocent, and that Nissan insiders and outside experts had advised him the financial reporting was proper. 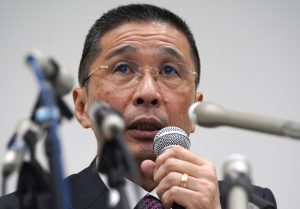 The chairman must be selected from among the board members, but whether a decision will be made today remains unclear.

Three outside board members – driver Keiko Ihara, Masakazu Toyoda, an academic, and Jean-Baptiste Duzan, formerly of Renault – are making that decision.

One candidate is chief executive Hiroto Saikawa, who was hand-picked by Ghosn to succeed him as chief executive. He has denounced Ghosn and Kelly as the ‘masterminds’ in a scheme to falsify income reports and abuse company money and assets.

Renault has kept Ghosn as chief executive and chairman, albeit appointing chief operating officer Thierry Bolloré temporarily as deputy chief executive, saying its investigation had not found wrongdoing in the awarding of his compensation.

It comes amid reports by Reuters that Nissan has filed a claim against Ghosn’s sister, Claudine Bichara de Oliveira, in Sao Paulo, claiming ‘unjust enrichment’. Nissan is said to be seeking a stay over a statute of limitations relating to a document of three years ago. Nissan is already locked in a battle with Ghosn and daughter Caroline over the contents of a Rio de Janeiro beachfront apartment used by Ghosn when he was in charge at Nissan.