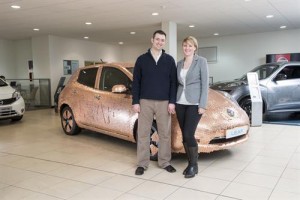 Brett and Liz Garner stand next to the unique Leaf

AFTER three years on sale around the world, Nissan has delivered its 100,000th all-electric Leaf.

The landmark car, a UK-built, top-spec Leaf Tekna in white was sold to British buyer, Brett Garner from Hampshire by Martins of Winchester.

To celebrate the sales achievement, Nissan has produced a unique version of its eco-friendly car which comes with a 100,000 unique optional extras, representing each sale up to the number 100,000.

The car is decorated in 50,000 two pence Sterling coins from the UK and a further 50,000 two cent euro coins from Europe. The choice of coins reflects how efficient Nissan Leaf is designed to run – just £0.02 per mile and less than €0.02 per kilometre.

The coin-covered Leaf – which has added 504kg to the overall weight of the car – took a specialist team of three people a full seven days to complete, with half the car covered in Sterling and the other in Euros. And to top it off, the word ‘Leaf’ is highlighted by the use of three layers of coins.

‘For such a revolutionary car, to achieve this sales milestone in such a short space of time is a major achievement,’ said Guillaume Cartier, senior vice president sales and marketing, Nissan Europe.

‘Don’t forget that when Nissan Leaf was launched in 2010, the charging infrastructure was in its infancy. But that didn’t deter the pioneers who immediately appreciated the benefits of a purpose-designed electric vehicle. Three years on, many are already on their second Nissan Leaf.’

100,000th Leaf owner Garner was prompted to buy the car by a friend and fellow owner, having realised the Leaf would suit his 50-mile daily round commute. The Garner family have since had a Polar charging point installed at their home by British Gas.

Garner said: ‘My wife wasn’t convinced initially but I ran through the finances with her – the low cost of maintenance, insurance, fuel and so on – and she softened a little. But when she used the car to make a 500-mile round trip, she was converted.

‘The journey took a little longer than normal with a stop for a quick charge top-up on both legs – now she insists on using the Leaf a couple of days a week.’

Cartier added: ‘Nissan Leaf is a pioneer in every sense and over the last three years has done a great deal to change attitudes towards electric vehicles – indeed some of the best Nissan Leaf salespeople are our highly satisfied owners who praise the car whenever they can. We are confident the next 100,000 global sales will come even quicker.’