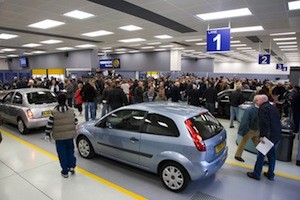 THERE has been another month of steady growth in values across ex-dealer stock, according to figures from Manheim.

All ten segments analysed also recorded an increase in selling price year-on-year. At £3,304, the average selling price in September 2014 was £515, or 18.4 per cent, higher in comparison with value figures taken from the equivalent month in 2013. The month-on-month increase from August 2014 was a slightly more modest £984.

The continued growth of the market in September follows this month’s plate change, which saw a significant amount of high quality part-ex vehicles make their way onto the market, giving dealers the chance to be more selective in their purchases. Manheim’s figures reveal that eight out of the 10 core segments had a lower average mileage in 2014 compared to equivalent figures in 2013. This was most noticeable with the executive range, which saw average mileage fall from 103,742 in September 2013 to 99,275 during the equivalent month of 2014.

Daren Wiseman, valuation services manager at Manheim, said: ‘The extended period of growth in the ex-dealer stock market can be attributed to a number of factors. The widespread availability of cheap finance and ever increasing consumer confidence in the market has contributed towards the long-term increase, while an influx of good quality, old registration cars since the unveiling of a new plate helps drive September’s sales.

‘As predicted last month, September continued the current record breaking streak of market growth but I’d call for caution going forward. Analysis of previous trends shows such persistent growth is unlikely to be sustainable in the long term and I’d expect the markets to stabilise themselves in the coming months. This could affect dealers in a number of ways, but I’d expect them to effectively match their pricing against the overall quality and volume of their stock.’

The average number of days a car spends in stock has stayed consistent at between five to six days across all segments is still the market average, while the percentage volume of cars in stock has also remained largely consistent.

Wiseman continued: ‘This is another month of reassuringly consistent figures for dealers and once again serves as testament to the current relative low cost of borrowing money, which has allowed consumers to drive new, more expensive models than perhaps they’d have been able to afford pre-recession. I would expect the upcoming rise of interest rates to spark market realignment within the next few months. While it’s likely 2014 will continue to outperform 2013 at most levels, I’d expect the prices to fall more in line with what could be considered seasonal averages.’