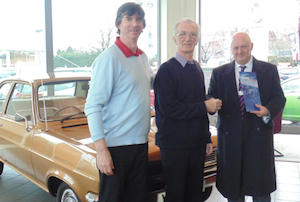 A CHARITY auction organised by dealer group Perrys has raised more than £10,000 for a children’s hospice.

The most prestigious item in the sale, a 1977 Vauxhall Viva owned by the business, was auctioned on eBay, fetching over £7,000 earlier this month. The keys were handed over to the winning bidder, Norman Bowie, at Perrys’ Vauxhall showroom in Preston, Lancashire.

The handover was performed by sales executive David Totty – the very same salesman who sold the Viva brand new back in 1977.

Mr Bowie said: ‘My son delivers newspapers and had an extra magazine at the end of his round; that’s where I saw an article about the Viva. When I saw the car on the internet it reminded me of my dad’s old car; the colour is exactly the same.’

Mr Bowie purchased the Viva as a surprise for his father, Jim, who has previously owned five Vauxhall models.

Mr Bowie snr said: ‘It’s absolutely fantastic. It was a complete shock and I am overwhelmed by it all. It is a great surprise.’

The pair are planning to take the car to various shows and said they might even make a visit or two back to Perrys to show them the car.

Totty added: ‘The Viva was an exciting car at the time. It had a modern look and its styling was well ahead of its time. As a sales executive, the Vauxhall Viva was a great car to sell because of its unique appearance.’

Alongside the Viva, Perrys also auctioned a number of other prizes in order to raise money for the Bluebell Wood Children’s Hospice, Sheffield. These included various computer tablet devices and a signed Stirling Moss steering wheel bearing a personal message to the recipient.

Ken Savage, chairman of Perrys, which sells new and used cars at 25 locations across the UK, said: ‘We’re delighted the Vauxhall Viva managed to raise more than £7,000 for the hospice. The car really captured people’s imagination and we’d like to thank everyone for their generous support for such a great cause.’