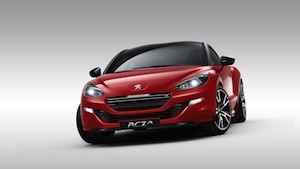 PEUGEOT has announced the prices for its most powerful road-going car – the RCZ R.

The sporty two-seater Peugeot will start from £31,995 when order books open later this month.

The RCZ R is powered by Peugeot’s potent 1.6-litre turbocharged petrol engine, which has been reworked to produce 270bhp. Also new on the car is a specially strengthened six-speed manual transmission, uprated clutch, larger intercooler and new twin-scroll turbocharger.

Peugeot has also given the RCZ R a modified exhaust, enhanced ‘sound system’ to amplify the RCZ R’s engine note and limited-slip differential, while the front and rear track have been widened and the springs and anti-roll bar have been stiffened. The rear spoiler is also fixed to add extra downforce and overall the car has been lowered by 10mm.

But Peugeot doesn’t think the car will sell in great numbers in the UK. Peugeot UK MD, Tim Zimmerman, exclusively told Car Dealer at the Frankfurt Motor Show: ‘We think we will sell 300 cars in the UK. It’s a more exclusive end to the market and won’t appeal to everyone. Whom it will appeal to is the aficionado.’