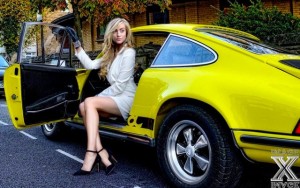 The classic Carrera 911 2.7 RS Touring will be used for ‘a day in the life of’ supermodel Beau who features in the new programme Brit Chickz, which follows the daily lives of six high-flying British career women.

Autofarm’s original Light Yellow Porsche Carrera 911 2.7 RS Touring was the obvious choice. The stunning example of this rare breed was imported to the UK from Germany in 1985, and has recently been subject to a detail re-commission of the highest order ahead of its sale.

First launched as a 210bhp homologation special, for Porsche to gain entry into production car racing classes, only 1580 were ever produced. Its combination of light weight, nimble handling and rarity has given the model an almost legendary status amongst enthusiasts, and for many the 2.7 RS has become the ultimate classic 911. 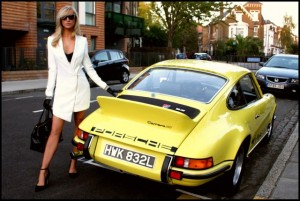 Autofarm’s renowned RS expert Josh Sadler said: ‘This is a proper RS Touring. With an older restoration and having been much cared-for, it looks and drives exactly as it used to 41 years ago.’

Beau added: ‘I was thrilled to have the opportunity to include the Carrera in the part of the show dedicated to my working life. The car does not need any introduction to its fans, but its presence in the series highlights my philosophy as a career woman: do not settle for less than the best.’

Autofarm, one of the UK’s leading independent Porsche specialists, continues to experience strong demand for this specific model, with a very similar 2.7 RS was sold by the dealer for over £500,000 in June this year, and as a specialist for over 40 years enjoys an intricate knowledge of the car and of the provenance of the cars built.

With just two owners in Germany to 1985 and only one UK owner since, the car comes with a comprehensive history, backed up by a large file of bills, stamped service book and original handbook. All owners have enjoyed club-level ‘fun’ competition use and none entailing any significant modification. One interesting ‘non-standard’ part is the ashtray signed by Derek Bell.

Video: The dealership staff who’d rather twerk than work!

UK car production in 2020 fell to lowest level since 1984 as industry battled with lockdowns, Covid-19 and last-minute Brexit confusion