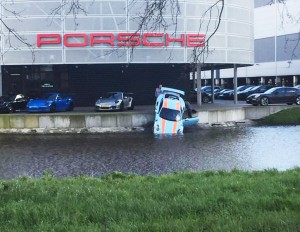 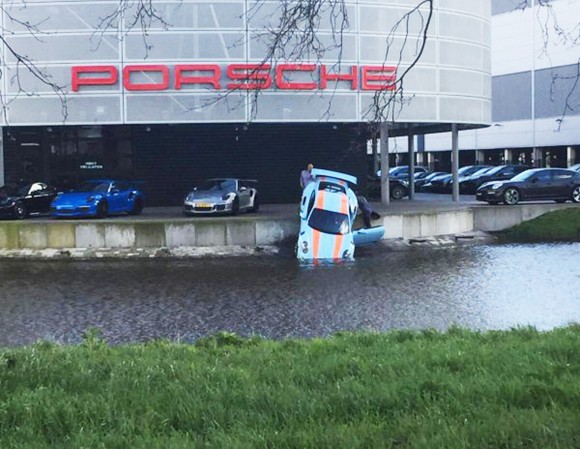 Porsche problems in Amsterdam as mechanic gets that sinking feeling…

OOPS! Someone had a bad day at the Porsche Centre in Amsterdam when a rare and very expensive 911 GT3 RS ended up partially submerged in the canal outside the building.

The sports car had just been given new decals when the accident happened, according to reports, before it rolled off a ramp … and straight into the waters of the Oostwetering canal.

A worker at the dealership told the AT5 website that a mechanic had ‘made a mistake’ when moving the car, before adding: ‘It was a blessing in disguise that the car landed on a slope and therefore did not completely disappear under water.’

That would have lessened the damaged caused to the vehicle, he said. The owner of the car has apparently been informed and has been asked to visit the dealership to check out the state of the car.

The car is said to have been worth £212,000 and Porsche say the GT3 RS is ‘equipped with the maximum degree of motorsport technology currently possible in a street-legal 911, yet retains supreme suitability for everyday driving’.

MORE: Baggott: A new way for you to get the latest automotive news

MORE: MG welcomes a dealership that does things a bit differently