A police force has pulled over a used car buyer and reported them for breaking the rules on essential travel during the third national lockdown.

It seems private used car sales may not be a good enough excuse to leave your house during the third lockdown after the Central Motorway Police Group reported a VW Golf buyer who travelled 100 miles to pick up the car.

The force, which covers Staffordshire and the West Midlands, tweeted last night that the driver had picked up a ‘good looking Golf’ but officers deemed that the 100-mile round trip wasn’t ‘a good or lawful’ reason to be out.

A spokesperson for the Central Motorway Police Group told Car Dealer: ‘While it is not necessarily a breach of Covid-19 rules to buy a replacement vehicle if required for essential travel, a car swap is not deemed appropriate during the current lockdown restrictions where essential travel only is permitted.’ 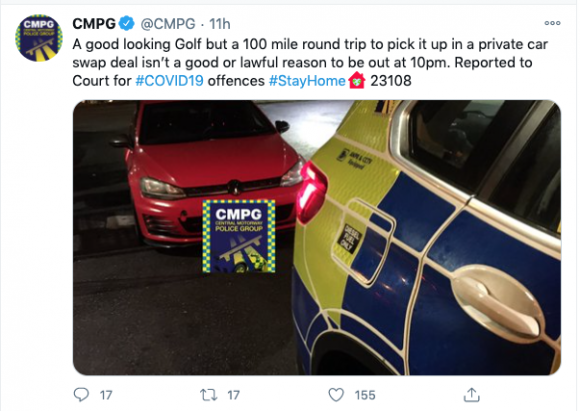 The National Council for Police Chiefs said it could not comment on whether police officers should report individuals who had been found to have bought a car privately during the lockdown, because police forces are ‘operationally independent’.

Nona Bowkis, a solicitor from motor trade legal experts Lawgistics, said private car sales do appear to be against the rules – but that click and collect can categorically continue at car dealerships.

She said: ‘From the comments on this story, it is clear that people can easily confuse the guidance with the law.

‘The guidance talks about essential journeys, but the law only talks about requiring a “reasonable excuse”.

‘That said, doing a private car swap deal which requires a 100-mile round trip does seem to break both the law and the guidance.’

Bowkis said that dealers worried that this might mean customers would get into trouble too should reassure them that click and collect is allowed.

She added: ‘The law specifically makes clear that people can leave home to collect “goods which have been ordered from a business” and this is why customers can legitimately travel to collect a vehicle ordered online or over the phone from a dealer operating a click and collect service.’

He said: ‘In relation to the case specifically of the police stopping an individual who has bought a private car, I guess it is possible one could argue that a private sale is not essential and is not transacted via a click and collect service, which is well documented to be allowed within the guidelines.

‘On the other hand you could argue that transportation is a critical requirement and we don’t know the circumstances in which the individual needed the car.

‘The challenge to all of this, of course, is that the rules are open to interpretation and grey.’

In responses to its original tweet, the @CMPG account for the police force, told Twitter users that the Golf driver was initially stopped to investigate other offences and then the ‘Covid-19 breach came to light’.