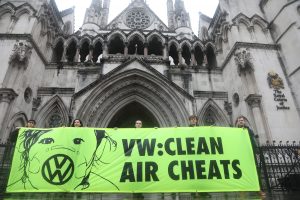 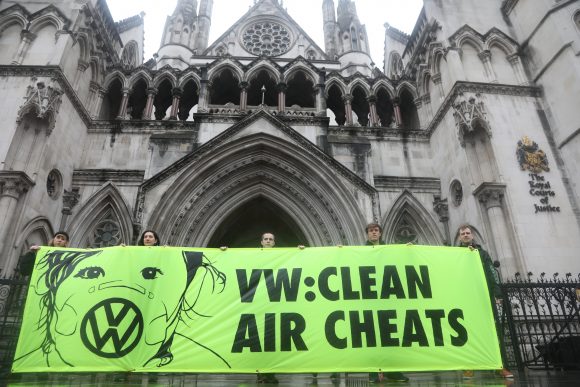 Greenpeace protesters call for justice as VW in High Court

PROTESTERS gathered outside the Royal Courts of Justice in London this morning as lawyers for Volkswagen entered for a hearing to kickstart the group litigation being brought against the manufacturer over the emissions scandal.

Members of Greenpeace London groups held a banner reading ‘VW: clean air cheats’. The banner features the face of three-year-old Londoner Sephie Ruan, who the organisation said suffers respiratory problems caused by air pollution and whose family have been campaigning alongside Greenpeace against diesel pollution.

Morten Thaysen, clean air campaigner at Greenpeace, said: ‘So far, VW has managed to evade any real consequences for lying to the public about harmful diesel emissions. That has to change. British towns and cities are in the midst of a public health crisis caused by toxic air.

‘VW knew its cars were spewing out dangerous pollution that puts people’s health at risk. It must be held to account in court, and it must play its part to help fix the pollution crisis it’s helped to create.

‘As well as compensating consumers, VW should quit diesel altogether and commit to an all-electric future. The longer giants like VW cling to diesel, the longer people will be made to suffer chronic health problems associated with diesel pollution.’

Colin Scott, 64, of Oban, who joined vwemissionsaction.com, said: ‘I feel that VW has totally betrayed my trust. The low level of emissions claimed by VW for my car were an important selling point when I bought my car. And by installing these cheat devices, VW has not only shown contempt for me and other customers, but also the environment and the air we all have to breathe.’

In 2015, VW was caught cheating on emissions tests by using a defeat device designed to reduce emissions in test conditions. More than 1.2 million vehicles sold in the UK were fitted with the device by VW.

In the US, where VW has faced criminal and civil charges, it has paid criminal fines of $2.8 billion, civil fines of $1.5 billion, and $4.7 billion on offsetting excess emissions and clean vehicle programmes, said Greenpeace. Volkswagen also agreed to spend up to $10 billion buying back vehicles and compensating owners and dealers.

In Europe, though, the manufacturer has faced no criminal or civil charges and has refused to offer European customers compensation, saying the defeat devices haven’t affected market value.

A joint inquiry by four committees of MPs earlier this month demanded that the UK car industry must contribute to a new clean air fund, following the ‘polluter pays’ principle.