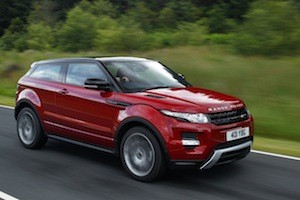 The Evoque was followed by the Ford Focus Convertible at 27.7 days and Chevrolet’s Orlando which spent an average of 27.9 days on dealers’ forecourts.

‘Despite the continued rise of the 4×4, the top 10 fastest cars also includes three convertibles, which of course would be expected at this time of year,’ said Rupert Pontin, Glass’s chief car editor.

‘The Ford Focus is by far proving to be the most popular convertible, which is really interesting. As a new car, it didn’t seem to gain popularity, but is excelling in used car sales.

‘Audi’s TT is in sixth place, and Audi also has six cars in the top 20 fastest-selling this month – Audi as a brand is doing fantastically well, and has a great affinity with used car buyers.’

June saw the average used car sale price peak at £14,053 – but the picture is even more interesting with the worst-performing used cars, says Pontin.

He said: ‘When it comes to the slowest movers, we see an interesting pattern. For the first time in many months the five slowest-selling cars from the previous month have been carried over, all be it in a slightly different order. However, this is not an accolade that Mini will want to welcome as the Paceman is once again the slowest selling car.

‘With Land Rover taking the fastest-selling car position for the month of June, it is surprising to see the Toyota Landcruiser languishing as the sixth slowest-selling car. The question is, is this over supply or a reflection of the lower build quality, ability and desirability of the Landcruiser?’

Pontin says that for the vast majority of cars in the slowest-selling table, there is an explanation: ‘Although it is a great surprise to see the Nissan Micra as the seventh slowest-seller, this may reflect some pre-registration activity as the car itself is desirable, competent and good value for money.

‘Mazda RX-8 as the eighth slowest-selling car is a likely reflection of the running costs and unreliability of the Rotary Wankel engine. Emissions are also not brilliant and these are fast becoming enthusiast only cars.

‘And the Mitsubishi Mirage at 10th slowest seller perhaps confirms rumours of pre-registration activity as well, but at best reflects the used car buyers’ lack of enthusiasm for a car bettered in most areas by most of its competition. Price drives sale volumes for these cars.’