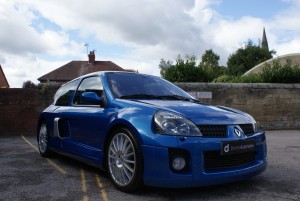 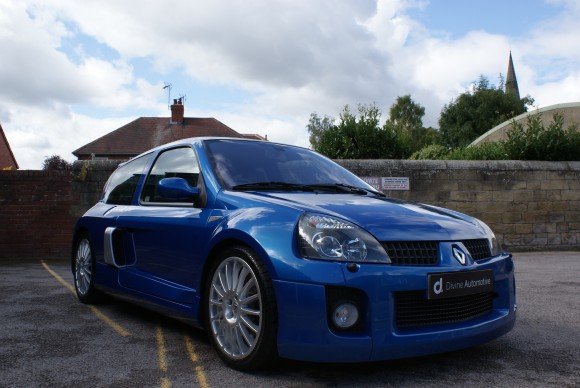 IT’S always a shame when a cult car, which was designed to be driven hard, surfaces with very few miles on the clock and the only buyers likely to take an interest are collectors who will lock it away again.

We’ve got to admit though, it did put a smile on our faces to see this Clio V6 in such pristine condition, when so many have been used to their full potential and driven into the ground.

Dealer Tom Blackmore suspects this particular specimen is a one-off and has priced it accordingly at £35,999. This might seem like a lot, but he’s willing to wait for the right buyer.

Blackmore told us: ‘I’ve had quite a few enquiries so far. But it’s a strongly priced car and I don’t expect it to sell quickly.’

So why is it so special? Because this Clio V6 is what you would call ‘box-fresh’. With just 1,100 miles under its belt, it takes you back to the summer of 2003 with a single glance.

Blackmore said: ‘It’s absolutely immaculate! The interior is, literally, like brand new and the outside is as close to new as you can get.’

Those in the know will recognise how common it was for steering wheels on Renaults of this era to wear badly, but Blackmore explains that there is no sign of that on this car.

Even the tyres are the originals, stamped with the date 2003.

‘It’ll go to a collector,’ confirmed Blackmore. ‘Because if you wanted to buy one to use and put on 2,000 miles a year, you’d buy one that already has mileage.’

This car’s story has quite a gloomy start, which may have spurred Blackmore to ensure the Clio V6’s next owner treats it just as well.

He explained: ‘The car was sold because the owner died about four years ago, from what I was told. He had a small collection and when he died, this was the last to be sold.’

Luckily it found a safe pair of hands in Blackmore, from Divine Automotive in Knaresborough, who deals in rare cars. When he first came across it, he knew he had to have it.

‘It was up for sale online and I agreed a deal within about three hours.‘I buy specialist cars and the fact that it was a one-owner car with 1,100 miles meant I knew that I had to have it. Anything rare with a build number is what I tend to go for.’