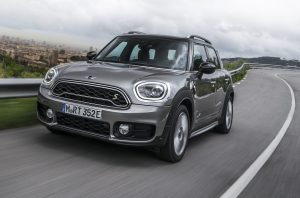 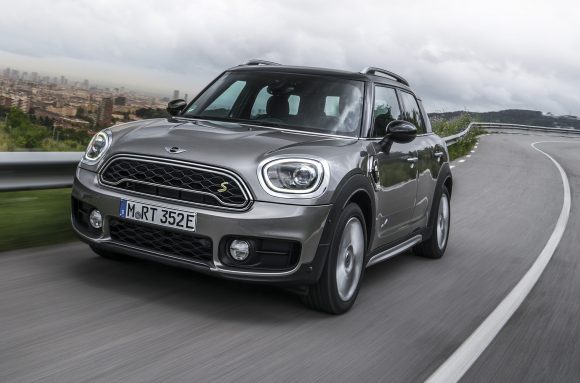 With diesel vehicles very much hitting the headlines at the moment – for all the wrong reasons – it’s understandable that manufacturers are bringing more alternatively fuelled options to market. Here’s Mini’s offering – the Cooper S E Countryman ALL4. Powered by a three-cylinder petrol engine coupled to an electric motor, it’s capable of a claimed 134.5mpg and should be able to run on all-electric for up to 25 miles at speeds of up to 78mph. The Countryman ALL4, then, is a car for people who want to keep running costs down, and they can do it all for a smidge under £30,000 after the government’s plug-in grant of £2,500 is worked into the  overall equation.

The Mini Cooper S E Countryman ALL4 utilises a three-cylinder petrol engine coupled to an electric motor underneath the boot. This is combined with a large lithium-ion battery fitted directly in front of the electric motor. Working

together, the systems produce 220bhp and 385Nm of torque. The power from the petrol motor is sent to the front wheels via a six-speed automatic transmission, while drive from the electric unit goes to the rear wheels through a two-stage single-speed transmission. Together, they can send the Countryman to 60mph in just 6.5 seconds and on to a top speed of 123mph.

The most noticeable thing when you first set off in the Cooper S E Countryman ALL4 is its eerie silence. The car will start by using all-electric power and it can carry on doing so – Mini claims – for around 25 miles at speeds of up to 78mph. This means that zero-emissions driving isn’t just restricted to urban areas. Thanks to three separate driving modes, however, you can specify how and when you’d like that electric power to come in. Elsewhere, the driving experience is much like any other Mini. There’s little way of telling there’s extra weight imparted into the car’s overall mass by the batteries on board, while its four-wheel-drive system means that there’s plenty of grip at all times. The six-speed automatic gearbox has a tendency to shift mid-corner at times, but for the most part it goes through the gears well enough. The steering has a good amount of weight to it and, though lacking any real feel, is accurate enough to allow you to place the car where you want it on the road. However, despite having similar performance figures as the petrol-powered Cooper S, the S E simply doesn’t feel as keen under heavy acceleration, especially when facing a gradient.

The Mini Cooper S E Countryman ALL4 is priced at £31,585. However, it qualifies for the government’s plug-in grant of £2,500, giving a sizeable incentive to those who are thinking of buying it. For that amount, you get satellite navigation as standard, as well as Bluetooth connectivity and cruise control. Also, because the Mini emits just 52g/km of carbon dioxide, vehicle taxation costs will be much lower than for a traditionally powered hatch. As always, there’s a sizeable optional extras list on the Countryman, with highlights such as wireless telephone charging and a larger satellite navigation screen improving the car’s overall feel, but these all add considerably  to its price.

Auto Express said: ‘Style-obsessed town dwellers will find appeal in the Countryman PHEV. For short commutes, the silent electric-only travel will help offset the initial price.’ Car said: ‘It has the same virtues as a regular Countryman: a high-quality interior, character in spades and trademark BMW connectivity.’

The Cooper S E Countryman ALL4 is an ideal choice for those who want the looks, charm and solid build quality associated with a Mini but with better economy figures than even the most efficient diesel-engined cars can offer.