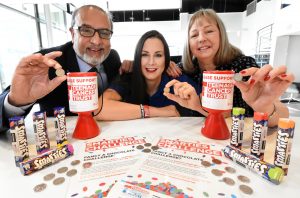 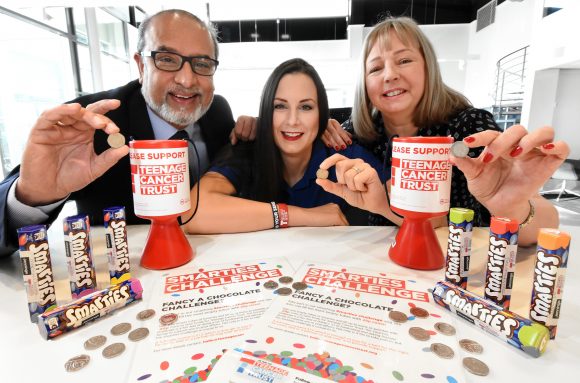 Smarties have the answer for dealer group’s new fundraiser

JENNINGS Motor Group has pledged its support to Teenage Cancer Trust for 2018.

The registered charity provides life-changing care and support to teenagers and young adults, and to launch the new partnership and get fundraising under way, 521 members of staff across the group’s Ford, Ford Direct, Kia, Mazda and Seat branches in the north-east region of England – in addition to the company’s Harley-Davidson dealerships in Gateshead and Leeds – have been given a tube of Smarties as part of an ‘Eat Me Up and Fill Me Up’ fundraising initiative.

The aim is for each member of staff to polish off the contents then replenish the tubes with 20p pieces. Each full tube will raise a total of £12, which will cover the cost of overnight accommodation for a relative or friend needing to stay at the charity’s units at The Great North Children’s Hospital and The Freeman Hospital in Newcastle upon Tyne.

Sonia Graham, regional fundraiser at Teenage Cancer Trust, said: ‘We are delighted to be working with Jennings Motor Group this year to raise vital funds to support local young people with cancer in the north-east.

‘It’s really valuable to have supporters like Jennings Motor Group, because for every young person with cancer that we can support there’s another one we can’t, so the money they raise will bring us nearer to our goal of being able to help every young person.

‘Their efforts will raise much-needed money to help fund our services in the north-east, including our two Teenage Cancer Trust units and our education and awareness programme, which provides free cancer awareness sessions to young people in schools in our region.’

Jennings managing director Nas Khan said: ‘We’ve always been committed to supporting local charities, and when we found out about Teenage Cancer Trust and the exceptional care and support they provide to young cancer patients in our region, we were keen to form a partnership and get fundraising under way.

‘We’re absolutely delighted to be able to pledge our support throughout 2018 and look forward to many more events taking place across the group over the coming months.’

Each year, Jennings Motor Group pledges its support to a local charity. The first charity to benefit from fundraising was Teesside Hospice in 2015. During 2016 and 2017, as a result of a unanimous vote by staff to continue support for a second consecutive year, the company helped The Great North Air Ambulance Service, raising more than £257,000.

On WorkshopMagazine.co.uk: Job of the Week – Freelance/contract MOT testers and vehicle technicians