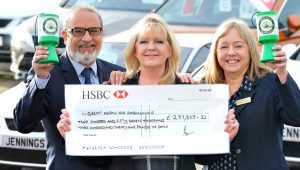 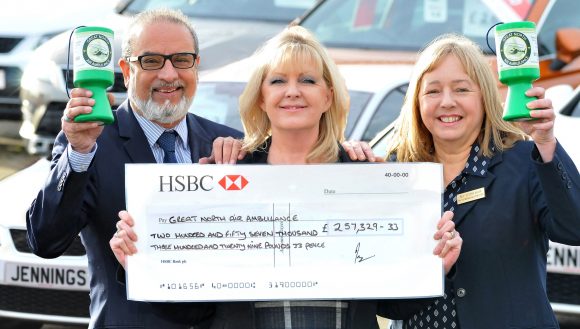 A TWO-YEAR fundraising pledge by Jennings Motor Group has raised more than a quarter of a million pounds for the Great North Air Ambulance Service.

Throughout 2016 and 2017, staff at the motor dealer group, which operates Ford, Kia, Mazda and Seat branches across the north-east of England, as well as Harley-Davidson dealerships and a Subway store, have been taking part in various fundraising activities.

The initiative was given an additional boost as a result of the motor dealer group donating a new car each year for the charity’s annual car raffle.

Other fundraising activities saw staff taking part in sponsored weight-loss competitions and outdoor activities including marathons and bike rides, in addition to a number of bake-offs, raffles, coffee mornings and pie-and-peas events, to name but a few.

Managing director Nas Khan said: ‘It’s been an absolute privilege working in partnership with the dedicated and committed team at the Great North Air Ambulance Service over the past two years.

‘We’ve had great fun and at the same time raised a fantastic amount of money for an extremely worthy cause.

‘On behalf of Jennings Motor Group, I would like to take this opportunity to wish the Great North Air Ambulance Service all the very best for the future.’

The official cheque presentation took place at the group’s Cargo Fleet Lane dealership in Middlesbrough, where Khan and his PA Bev Stephenson handed a cheque for £257,329.33 to Mandy Drake, deputy director of public liaison at the ambulance service.

Grahame Pickering, chief executive of the service, said: ‘This has been one of our most successful corporate partnerships of all time – we’ve been blown away by the enthusiasm shown by staff and customers at Jennings Motor Group. The money they raised is already being spent on saving lives and easing suffering across our area.

‘We wish Jennings well with their next partnership and hope to work with them again in the future. We are now preparing for the 2018 car raffle and are looking for corporate support to make that happen.’