Home > News > Spencers Car Sales: The used car market will be back 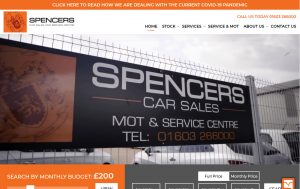 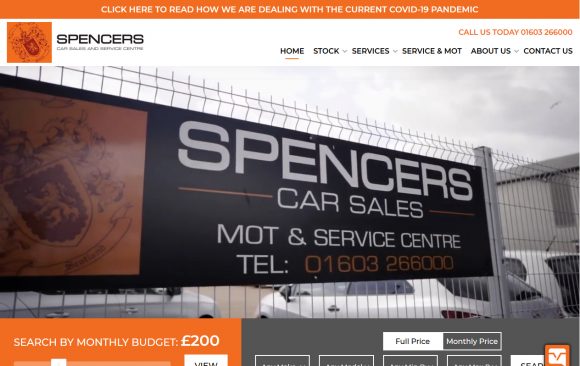 Spencers Car Sales: The used car market will be back

Spencers Car Sales in Norwich has been moving quickly to adapt to the ever-changing coronavirus situation – a strategy that its boss believes is vital for businesses to survive and thrive once again.

Speaking to Car Dealer, director Spencer Gray said it was all about damage limitation, and he outlined the steps taken by the award-winning company both before and after the government-ordered shutdown, including FaceTime virtual tours of vehicles – as well as disinfectant bombs that are put in cars just before delivery.

And with everything now having to be done remotely, it’s just something else that he and his team are tackling head-on with a positive attitude, being proactive and inventive.

‘All businesses need to work together to support the industry,’ he said. ‘We’re now doing everything virtually. We’re working from our website, which we’ve already updated with 67 Degrees, so that everything can be done online.

‘People can reserve the car online, then we can go in, do a virtual tour of the car through FaceTime, then we’ll do the long-distance sale and then we deliver the cars, making sure they’re all cleaned before we’ve delivered. We put the key in a little key safe for them and after so many days they can go and get the key out, but they’ll all be cleaned and disinfected as well before we put the keys in.

‘We’re being as positive as we can in the industry so that we can keep rolling. It’s all we can do.’

And Gray is doing all he can to keep up staff morale, too. It’s been a sad reflection of the current situation that he’s had to furlough a few employees, but that will only be for the short term.

Its service centre remains open and the two-metre social-distancing guideline is being strictly observed, along with scrupulous cleanliness.

‘We can’t risk anything. We won’t risk the customers and we won’t risk our staff. But we will try to salvage what we can with sales and keep going as positively as we can, and just try to support the industry as much as possible. We’re trying to be sustainable with what we’re doing, and hopefully that will keep us ticking over so that we can weather this storm.’

He was quite open and honest about the tough situation, too. ‘It’s horrendous. but we’re not the only dealer. It’s all the dealers and I feel for everyone – we’re all in this together.’ And he urged everyone to support each other to give every business the opportunity to survive. ‘We’ve all got to support one another as a team,’ he said.

Sales may have fallen at the business, which was highly commended in the Used Car Dealership of the Year 100+ Cars category at last year’s Car Dealer Used Car Awards, but the inquiries are still coming in to the salespeople working from home.

Appointments for virtual tours are also being made, allowing people to see the car and make a decision – and then buy it online though the dealership’s website.

‘I’ve always been one to move quite spontaneously and to move with whatever times have got,’ said Gray.

‘I don’t like to fade away, I don’t like to give up. I don’t believe in that. I believe that in business you’ve got to be positive – you can’t go into it half-hearted.

‘We are always going to have uncertain times in life, but we have got to evolve, we have got to move forward and not just stay there letting the damage come. You’ve got to pull your socks up, roll your sleeves up and get stuck in, and that’s all that we can do at the moment.’

And what about the market and industry after the pandemic?

‘I don’t think new cars will be able to get out quick. I think that’s going to be a year’s delay.

And he concluded with this upbeat message.

‘It’s no good sitting back and letting this industry fold. We will all find a way to survive and crack on and keep the business going. The industry has been here for a long, long time and braved so much. If we can beat Brexit, we can beat this.’