Workshop manager Jay Bhatia was clapped out of Jack Barclay Bentley last week as he left for the final time after 48 years with the business to retire.

Bhatia joined the Bentley dealer in 1972 as part of the in-house apprenticeship scheme, which took five years to complete before they were even let near the workshop.

He then stayed with the London business, working his way up the ranks and at the three different workshop locations.

Bhatia was presented with a personalised Bentley-branded cake and his original apprenticeship paperwork from 1972, detailing how he was paid only 19.5p an hour when he joined. 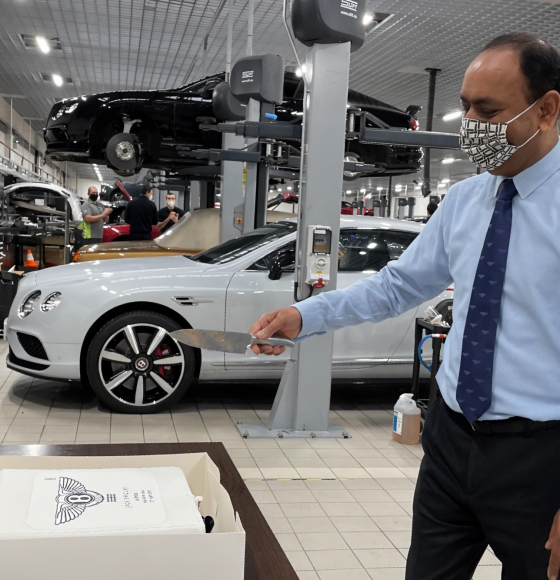 HR Owen CEO Ken Choo, which owns Jack Barclay, said: ‘We’re so grateful for Jay’s 48 years of service with us at Jack Barclay Bentley, but we’re equally sad to see him retire.

‘Jay started here 48 years ago as an apprentice – even before I was born – earning 19.5p per hour, and he’s been a key member of our team ever since.

‘Everyone around Jay has learned a huge amount from him, including a young apprentice that Jay trained years ago – Jake Owen – who will now be taking on Jay’s responsibilities.

‘When we’re able to properly celebrate, I know that the whole HR Owen family will get together in wishing Jay a very happy retirement, just as literally thousands of people from all over the world have done in response to our announcement on Linkedin.’

Choo added: ‘The passion that the Jack Bentley aftersales team share is clear in their loyalty to the brand; Jay is joined by a number of long-standing employees, including George Williams who retired recently after 45 years, our Parts Manager, Terry Lupton, who remains with us after 44 years and our Bentley Service Manager, Shahz, who has been here for 40 years.

‘In fact, 16 of our technicians remain home-grown, which is extremely rare.’