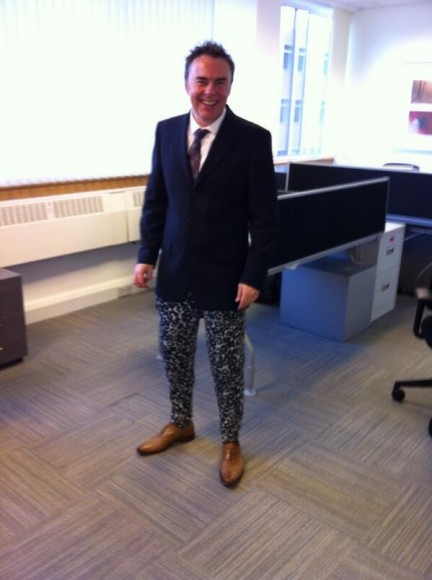 How Tesco put CAP’s Mike Hind in the wrong trousers

It started with an innocent tweet about weight loss and salads – and ended with an embarrassing virtual dare that one member of the motor trade had to see through.

Mike Hind, PR manager for trade prices experts CAP, probably thought little of his tweet to supermarket giant Tesco a few months back – that was until he was walking into his office in a pair of James May shirt-patterned tights.

Yesterday, brave Hind strode into the company’s Leeds HQ with an interesting Hugo Boss jacket, Oliver Sweeney shoe and Tesco trousers combo – much to the delight of his colleagues.

In the spirit of the dare, Hind took to Twitter to broadcast his ‘interesting’ get-up to the world. Here’s Hind explaining exactly what happened…

One day, I tagged @Tesco in a tweet about their £2.50 salads being key to my having lost 1.5st in weight. Credit where it’s due, I thought

And there, readers, was Hind’s mistake – the beginning of a joke that would lead to a clothing combination that would make even our very own James Batchelor wince.

Not long after, the Tesco social media team, replied…

A nice man at @Tesco noticed my plight. He got in touch. Requesting my new clothing sizes. Said maybe they could help me out.

The nice man on the @Tesco twitter account said he’d send me something. On condition that I tweeted a picture of me wearing what he sent

Oh dear. There it is.

You can imagine the laughs at Tesco Twitter HQ as they stuffed a fat envelope with a pair of the most garish tights on their shelves.

But, true to his word, Hind bit the bullet and pulled them on…

So, here I am, hard at work in my new @Tesco ‘threads’. As promised. At long last. pic.twitter.com/bzXrJSCNP3

Colleague: “Ace leggings, Mike. How much did those set you back?” Me: Free, from @Tesco … long story pic.twitter.com/FEyQia3AZc

@MikeH_CAP Haha! Loving it Mike! You really do pull them off :-p #DietKingMike

Hind remained in good spirits though. As PR manager at CAP he’s in charge of championing the power of social media – and there’s nothing like a man in tights walking through the office to start a conversation about the power of a tweet.

Tesco’s funny take on the whole situation just proves that Twitter doesn’t have to be taken too seriously.

It’s a great place to give brands a personality and doesn’t just have to be about promoting your latest offers or new cars for sale.

Even Hind – still wearing the comfortable slacks – was impressed, tweeting: ‘They’re (Tesco) really good. We’re doing a social media workshop here this week and holding them up as a great example.’

Nice words, but then they did help him lose a few pounds with their salads after all…

Perhaps the motor trade – and the teams that run their social media accounts – could learn a thing or two from Tesco’s tweets.